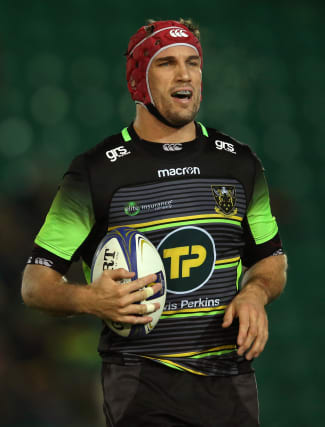 A planned lawsuit by former players suffering from early onset dementia could be the catalyst for further measures to protect current professionals being accelerated, according to an official at the Rugby Players Association.

A group of what is now understood to be 10 former players is set to launch an action against World Rugby, the Rugby Football Union and the Welsh Rugby Union.

Among them is Steve Thompson, 42, a World Cup winner with England in 2003 who now says he has no recollection of playing in that competition.

Christian Day, who joined Northampton a year after Thompson had left the club, now works as a player liaison officer at the RPA.

He believes great strides have already been taken since Thompson’s playing days but admits the game “can’t sit still”.

“We have to continue to innovate and look for ways to keep the essence of rugby the same, that’s so, so important,” he told the PA news agency.

“A lot of members I speak to will say ‘don’t change the game, don’t make it less physical, that’s what I’m good at, that’s rugby’, but can we make elements of the game that are currently dangerous safer? That’s the magic question and what so much work is going towards.

“And I just wonder whether this lawsuit might be the catalyst for some rapid changes in certain areas that perhaps wouldn’t otherwise happen.”

Day says measures to limit in-game concussions and placing an upper limit on the amount of contact training is “low-hanging fruit” that could be introduced quite quickly.

“The high tackle framework was brought in about 12 months ago to quite some derision from some corners of past players and the media, who said it was making the game soft. I think that’s a term that needs to be firmly put in the bin.

“The game isn’t soft and rugby will never be soft, but we need to move away from the idea that hitting people in the head is something that we should tolerate.

“The high tackle framework has made some difference but there will now probably be calls that it should go further.”

The lawsuit calls for a limit on the amount of contact training, and Day agrees.

“You could have players being exposed to countless contacts in a training session, which will never fully be recognised or picked up the way they would in a game,” he said.

“So my personal take is that regulation of the amount of contact that players can do is a positive step for the game, and it’s something I suspect will now be accelerated as a result of this lawsuit.”

Day accepted better player aftercare, one of the ’15 commandments’ set out by the former players’ legal team, was required.

“Our charity Restart does some amazing work, but they tend to be for players who experience terrible injuries or who fall into real times of hardship,” he said.

“Maybe the point is, do we need something to pick up underneath that grade of hardship? The answer probably is yes. The question again then comes, who’s going to fund that?”

Exeter boss Rob Baxter has made a robust defence of rugby union’s concussion measures and claims there is “little value” in comparing the issue now with historic cases in the sport.

“I’m not quite sure how many more (safety measures) we can put in because of how much is done around concussion now,” he said.

“People don’t realise that you are likely to fail a HIA (head injury assessment) without having any head injury at all.

“That’s how hard it is to pass. To get back on a field you have to be feeling well and cognitively bang on – you’ll be asked something you don’t know.

“We are a very good sport at jumping on something and creating something huge.

“There’s no reason not to have discussions about this. But I think people are being a little disingenuous if they’re not prepared to say about the huge steps we’ve already taken.”