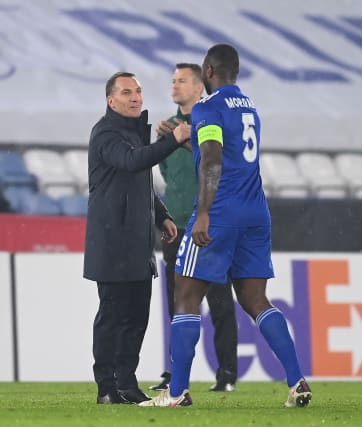 Brendan Rodgers praised Leicester’s professionalism after they strolled to a Europa League victory over AEK Athens.

First-half goals from Cengiz Under and Harvey Barnes wrapped up a 2-0 win for the Foxes as they won Group G.

Leicester top the group ahead of Braga having maintained their 100 per cent home record in Europe this term, with the draw for the last 32 being held on Monday.

Rodgers said: “I couldn’t ask for any more. If you said at the start of the season we would be top of the group and fourth in the Premier League with all the injuries we’ve had I would have been pretty pleased.

“We spoke about the scenario before the game, trying to make it more than a group game. It was one we wanted to win so we had to show the mentality and attitude in the game.

“We wanted to start strong and played with intensity and real speed. Everything about our game was very good. We managed the game well and had more chances, with a little bit more quality we could have had the goals.”

The Foxes were able to rest Jamie Vardy, the striker remaining on the bench, while they were without James Maddison who was missing with a minor knee problem.

Rodgers added: “He should be OK for the weekend (against Brighton), the medical team thought it best to let it settle down for a couple of days.”

It was comfortable for the hosts from the start and Roma loanee Under opened the scoring after 12 minutes when he seized on a mistake by Stratos Svarnas to smash in a 15-yard volley.

Two minutes later Barnes sealed the game when he cut in from the left and his shot deflected in off Ionut Nedelcearu.

Dennis Praet was denied by Panagiotis Tsintotas and, after the break, he poked wide before the goalkeeper saved Ayoze Perez’s close-range effort.

Barnes shot wide and Nelson Oliveira fired AEK’s only chance over late on with their limp defeat increasing the pressure on under-fire manager Massimo Carrera.

“The first half, we didn’t start well and defended too deep. In the second half I saw a reaction and we were more aggressive,” said the Italian, after AEK finished bottom of Group G.

“Errors can happen, I’m not concerned about it. We didn’t press enough, our midfielders were sat too deep and they weren’t pressing their defenders and midfielders. It meant the Leicester forwards were finding space between our lines.”