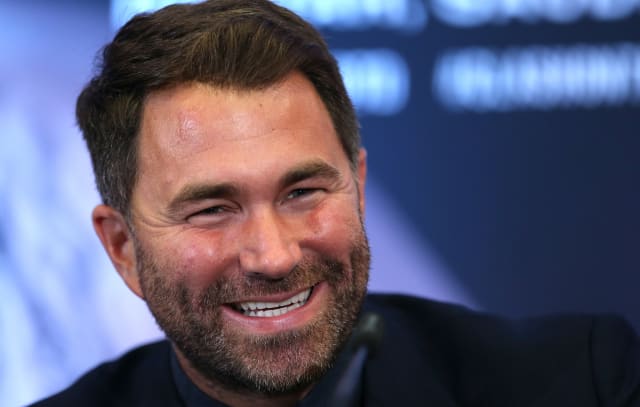 Eddie Hearn says he is “as close to 100 per cent” as he can be that a fight between Anthony Joshua and Tyson Fury will happen in 2021, but does not want the WBC holder Fury to have a warm-up bout beforehand.

The build-up to Saturday’s world heavyweight clash between Joshua and Kubrat Pulev at Wembley’s SSE Arena – where the WBA, WBO, IBF and IBO titles are on the line – continues to be dominated by ‘Battle of Britain’ talk.

An agreement in principle for Joshua and Fury to finally go head-to-head has been in place since earlier this summer, but Hearn wants the majority of the finer details confirmed by the time this weekend’s action gets under way.

Defeat to Bulgarian Pulev would scupper those plans and the Watford-born boxer has been here before, with talk ahead of his first bout with Andy Ruiz Jr largely centred on a future meeting with Deontay Wilder.

But Hearn said: “I never really felt the Wilder fight would happen, but I am as close to 100 per cent as I can be that the Fury fight will happen if AJ wins on Saturday.

“We can talk about it before, but we all knew we were being messed around and would there actually be a deal.

“There is more pressure now because we know it is there. All we’ve got to do is win and I don’t know if that is why AJ is a bit edgy.

“Is he trying to make himself edgy to make sure he is switched on in the fight? Maybe against Ruiz in the first fight he wasn’t edgy but I think he has really invested his time in improving since that Ruiz fight and he really wants to show those improvements.”

Saturday will be Joshua’s first bout in 12 months, while rival Fury had been set to get back in the ring last weekend following his February knock-out victory over Wilder in Las Vegas.

A proposed December 5 contest in London was due to be a warm-up to the main event next summer.

However, those plans were shelved last month, with Fury revealing on Twitter ‘the Gypsy King is returning in 2021’, and Hearn hopes that will be against Joshua otherwise his fighter may have to face Oleksandr Usyk, who is now the mandatory challenger for the WBO title.

The Matchroom promoter added: “I’ve mentioned it to their team. If Tyson has a warm-up fight, we’ll fight Usyk and then everything gets…there is no reason for a warm-up fight.

“He boxed in February and he doesn’t have the style where he needs a warm-up fight. It will be straight in and I think he is happy with that.”

There is every chance Fury could be in the ring with Joshua after Saturday’s main event if he accepts Hearn’s offer to attend the night.

With cousin Hughie also on the undercard, there is extra incentive for the 32-year-old to be in the stands.

“I messaged him yesterday saying ‘you are more than welcome’,” Hearn revealed. “Some fighters feel it is chasing it a little bit but there is nothing to chase because we know what the deal is.

“If I was Fury, I’d want to watch AJ up close and that is why AJ came to the Usyk fight. To support (Dereck) Chisora but really to watch Usyk up close.

“I think it is worthwhile Fury coming for many reasons and then, listen I’d like to be in a position on Saturday to say we have a deal, we have an agreement, these are the dates we are working to and now we will find a venue.”

Wembley has long been mooted as a destination for the first of two fights between the pair, but only on the proviso it could host a full capacity.

With the NHS vaccination programme across the UK now under way, the chances of the Brent venue hosting the showdown remains high.

The Tottenham Hotspur Stadium, the original venue for Joshua-Pulev, is not in the running and will have to wait before it adds boxing to the list of sports to have taken place at the ground.

Hearn is anticipating interest from Saudi Arabia, Qatar and Abu Dhabi too and knows the clock is ticking, with predicted pay-per-view figures for the ‘Battle of Britain’ more than two million.

He added: “We need to now say this is happening, the only things to sort out is where it will take place, the UK and USA broadcasting situation, which actually isn’t that confusing, and when?

“The answer is end of May, June but what we need to do is announce there is an agreement and then go to the various sites and say ‘make your offer’.”