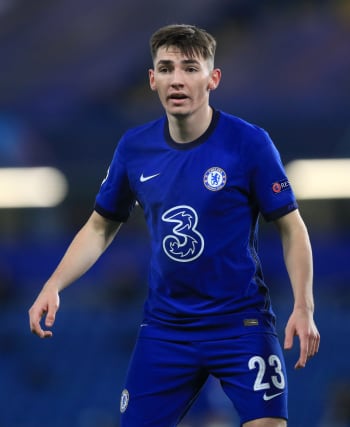 Frank Lampard has tipped Billy Gilmour to play his way into regular first team football at Chelsea this season.

Gilmour made his first start after a four-month absence through knee surgery in Tuesday’s 1-1 Champions League draw with Krasnodar at Stamford Bridge.

The 19-year-old Scot looked immediately back to his assured and confident best, directing play in midfield.

And Blues boss Lampard now believes the Scotland Under-21 star can find his niche in west London, rather than head out on loan in the new year.

“The way Billy played and how he trains, I see him growing with us,” said Lampard.

“He’s going to be a Chelsea player so it’s just about making sure the pathway is right for him.

“He made that pathway right last season, and then got injured at the wrong time, but playing as he did against Krasnodar, he’s got a lot to offer us.”

Gilmour faces a tougher battle than ever for regular action at Chelsea, following the club’s £220million summer recruitment drive.

But boss Lampard has been at pains to point out the depth of his squad as a strength rather than a concern.

The Blues should have the strength to cope with the two-week hamstring injury absences of Hakim Ziyech and Callum Hudson-Odoi, which underscores Lampard’s view on his extended ranks.

The temptation for both Chelsea and Gilmour could have been to seek a loan, but both parties now seem determined for a consistent first-team presence this season.

The potency of Chelsea’s squad could arguably render the standard of training higher than that on offer in some loan scenarios too.

A number of Chelsea’s fringe players have produced improved performances when offered first team chances this term, and that can only be as a result of the increased competition and standard at the Blues’ Cobham training base.

The Germany playmaker showed some nice touches himself as he battles back towards full sharpness after his Covid-19 illness.

And then the ex-Bayer Leverkusen star took time out to tip his cap to the fast-rising Gilmour.

“We all know that Billy is a very talented player with a lot of qualities,” Havertz told Chelsea’s official club website.

“He is still very young like me but in the Champions League he played very well and we are all very happy with him. He has a big future ahead of him.”