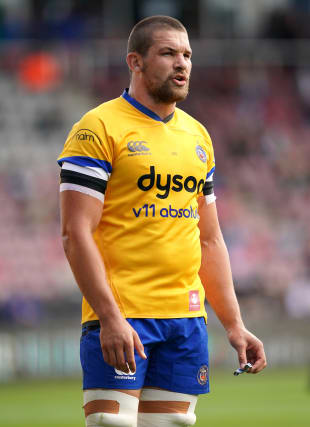 Planned legal action from an initial group of seven ex-international players – including 2003 England World Cup winner Steve Thompson – is being taken against the rugby authorities for “failure to protect (the claimants) from the risks caused by concussions”.

Thompson, 42, has been diagnosed with early onset dementia, and revealed he cannot recall his part in England’s glorious campaign in Australia 17 years ago.

England second-row Ewels has been through his own experiences of an enforced period out through concussion.

The 25-year-old believes the game can continue to adapt both on and off the pitch to help protect player welfare.

“Maybe in the past there was a pre-conception around concussions, that you could play on, but I know now speaking from a players’ point of view that you don’t mess with that stuff,” said Ewels, who is set to lead Bath into their opening game of the Heineken Champions Cup against Scarlets on Saturday.

“There is more to life than rugby and if you haven’t got your brain health when you retire, then that is no good.

“The protocols are in place and I trust the game is looking at the latest science all the time. In my own experiences, going through stuff, I felt really well looked after.”

Ewels has 17 international caps, and started against Georgia in the Autumn Nations Cup.

He added: “When you look at old footage, the hits are getting bigger and bigger, the game is getting quicker, but ultimately the sport we play is a collision, confrontational sport.

“As much as possible we want to mitigate how many concussions we get, which they have done in terms of the rules of tackle heights, and how you are allowed to carry, guys have worked on tackle technique more.

“There is only so much you can do to protect the guys within the game which we play, but the most important one is when someone suffers concussion, it is how well they are looked after then.

“It is those back-to-back concussions where you can start to have long-term problems.

“I think the game will keep revolving, keep changing, to try to make it safer and safer, while still keeping the core elements of a contact sport in there.

“Even in the short time I have been in the game, what has come a long way is once you have had concussions is the protocols you go through and how you are looked after.”

Bath director of rugby Stuart Hooper admitted it was “pretty harrowing” to read the reports over Thompson’s condition.

The 39-year-old former Saracens, Leeds and Bath prop believes rugby has made great strides in aiming to give players all the possible protection.

“There is an awful lot in the game now to make it a very safe game,” said Hooper, who maintained full-collision in training was “absolutely limited”.

“I believe the game is safe and the players playing it right now have not only the right protocols and procedures around them, but there is also a high degree of education over concussions and head injury.”

On his own playing experiences, Hooper said: “I had 17 years playing in the Premiership, and always felt very well protected from a head injury perspective.”

Bath back-row forward Josh Bayliss admits the issue of dealing with concussion is a concern.

The 23-year-old said: “It is a worry, it is scary, but I would like to think the way the game is going, with the research going into it, actually the risks are being mitigated as much as they possibly can be.

“My love for rugby is more than worrying about the risks that come with it later on at this stage.

“When it gets to the point that the risks outweigh my love for rugby, that is when I will sort of start to have a serious think about it.

“But it is definitely something which is at the forefront of everybody’s mind.”