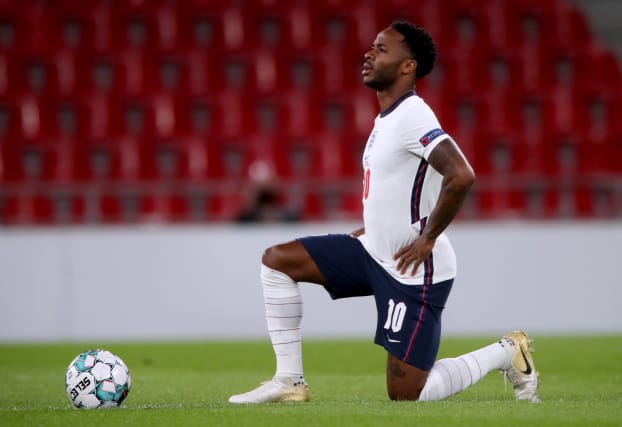 Raheem Sterling has welcomed the unity shown by the England squad and its staff in support of the Black Lives Matter movement.

Manchester City forward Sterling, 26 on Tuesday, has led the fight against racism since publicly criticising the media’s portrayal of black players last year.

Sterling responded to racist abuse he had received in City’s defeat at Chelsea last season with a powerful post on Instagram and has since become football’s unofficial spokesperson for equality.

“I’m not saying I started it, but since that incident I’d say a lot of people have more of a voice now,” Sterling said in an interview for the Football Association’s ‘Black, England and Proud’ series on Facebook.

“I think pretty much every person in the squad who is black is doing something with regards to racism, trying to fight against it and that’s a good thing.

“No one wants to see it. I wouldn’t just say the black players, all the white players in the national team are with it.

“We have meetings about if anything happens during a game, what are we doing about it and to be honest some of the best answers are from some of the white players, they’re so supportive here.

“All the coaches and staff here as well within our team, I feel like everyone gets it and we’ve been moving forward.”

Sterling announced in October that he would be launching a foundation to help disadvantaged young people, which will include providing university scholarships and work placements.

“I wanted to get action in place and that’s what I’m doing,” he said. “Me and my team are going back to communities, very much like the ones I grew up in, to try and help.

“If it’s universities and helping to send people – because we know the circumstances in a lot of these communities – that’s as much as I can do.

“I can’t change the world, but I can do my bit in certain areas that I can affect.”

Sterling also spoke of his determination to win a major tournament with England following their run to the semi-finals of the 2018 World Cup.

“You could see how much it means to everyone across the country if we did win it,” he added.

“It is something that hopefully in my career I can do with England, try and bring a trophy home because I know what it’s like.

“If we win something I won’t have to pay for anything in this country again! So that’s something I’m looking forward to doing.”