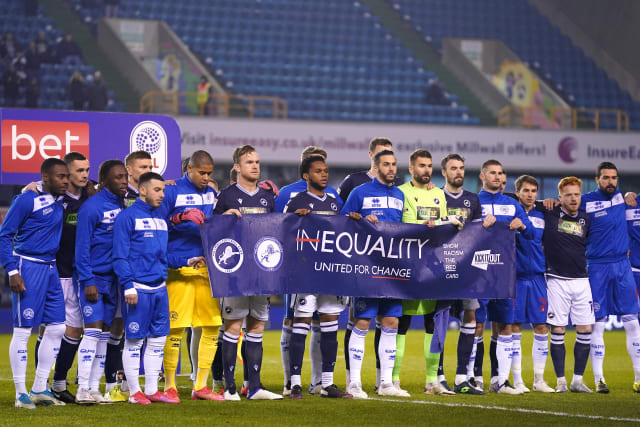 Millwall’s fans respectfully observed the club’s “show of solidarity for football’s fight against discrimination” prior to kick-off in their home game against QPR.

Before Saturday’s home clash with Derby, a section of Millwall supporters booed when their players took a knee, prompting an investigation by the Football Association.

On Tuesday night, the club’s players were applauded when they lined up linking arms with QPR players, holding a banner which read “Inequality – united for change”.

Millwall also wore the Kick It Out logo on the front of their shirts, while some QPR players took a knee, having opted in recent weeks not to make the gesture as they felt it only diluted the Black Lives Matter movement.

Millwall said in a statement before the game: “Players from Millwall and Queens Park Rangers will stand arm-in-arm with each other in a show of solidarity for football’s fight against discrimination ahead of kick-off at The Den on Tuesday night.

“The two teams will hold aloft a banner to show their collective commitment towards ongoing efforts to rid the game of racism in a positive move which has been supported by Kick It Out, Show Racism The Red Card, The PFA, The FA and The EFL following discussions with the club in recent days.

“Millwall believe that this gesture, which the club hopes to repeat with other visiting teams in the coming weeks and months, will help to unify people throughout society in the battle to root out all forms of discrimination.

“Millwall have a zero-tolerance policy against racial and all other forms of discrimination and want to again make clear to anybody who holds such views that you are not welcome at this football club.

“Millwall’s stance, as always, is that anybody found guilty of racial abuse is banned for life.”

The Lions also handed a letter to all fans attending the game requesting that they respected the club’s stance.

QPR chief executive Lee Hoos said in a statement released on Monday: “We have always been at the forefront of encouraging equality and diversity while tackling discrimination in all its forms.

“Our initial approach to this particular situation was for all our players to take the knee in a show of solidarity.

“However, following a series of discussions with Millwall, as well as internal conversations involving myself, director of football Les Ferdinand, manager Mark Warburton and the entire first-team squad, it was agreed that standing shoulder to shoulder with our opposition players would be a more powerful response.

“On top of this, some of our players wish to take the knee and we fully support this action.”