I gave my body to rugby, I didn’t know I was giving my mind too – Alix Popham 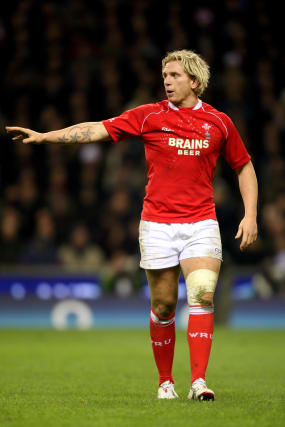 Former Wales forward Alix Popham has revealed how his life has been “turned upside down” due to brain damage sustained while playing the game.

Popham, who won 33 caps for Wales between 2003 and 2008, was diagnosed with traumatic brain injury, early onset dementia and probable chronic traumatic encephalopathy (CTE) in April.

He is one of a group of former internationals, including ex-England hooker Steve Thompson, planning legal action for negligence against the rugby authorities.

“From the age of four, rugby was my life; it still is. I had a great career and willingly gave my heart, body and soul to rugby. I just didn’t know I was giving my mind too,” Popham said.

The former Newport, Leeds, Llanelli and Brive back row’s diagnosis followed a period of short-term memory loss, which included causing a fire at home after he left a grill on.

His wife Mel can no longer leave him at home to look after their two-year-old daughter, while it was during a bike ride when he realised that something was seriously wrong.

“I was out on a bike ride when I pulled up at a crossroads and had no memory of where I was, how I got there or how to get home,” he said. “I had to use an app on my phone to navigate back home to Newport.

“That incident really frightened me. I quickly went to see the GP who ordered an MRI scan and some neuropsychological testing.

“The MRI showed ‘a few white dots’ but found no sign of any major problem, so I was reassured in some ways, but confused and frustrated as I was still suffering symptoms which were having a really negative impact on my life.”

Popham’s diagnosis was made after a DTI (diffusion tensor imaging) scan, neuropsychological testing and an interview with a neurologist a few months later.

“In just one phone call – on April 16 this year, not long after lockdown had started – my world was turned upside down.

“Yes, we had an answer as to why I was struggling so much, but my future looked so bleak.

“Mel and I only married last year, we were hoping to have another child too, but that’s just not going to be possible now. We can’t do that knowing my diagnosis and what this means.”

Popham said there are chunks of his playing career that he has little memory of, such as his last game for Wales against England in 2008.

“The way it has been described to me is that my brain was repeatedly inflamed from numerous concussions and sub-concussions so it brain was a bit like a camera without a film, it took pictures but it didn’t store them,” he said.