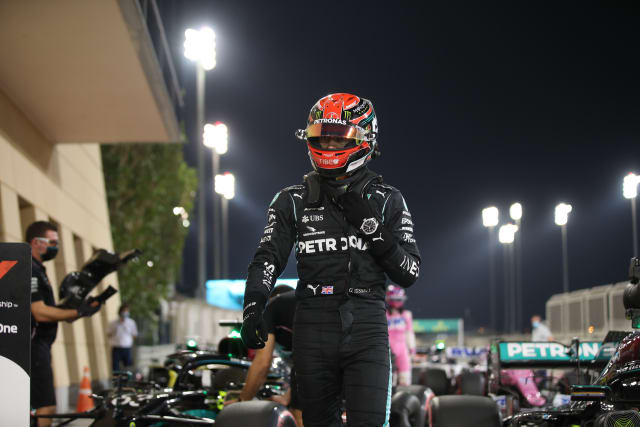 George Russell hopes he has ramped up pressure on Mercedes to put him in their car next season.

The 22-year-old British driver came up agonisingly short of a shock win on his debut for the sport’s all-conquering team following a brilliant performance in Sunday’s Sakhir Grand Prix.

Russell, standing in for Lewis Hamilton, was on course for victory before a Mercedes pit-stop howler, and late puncture, derailed his chances of becoming only the fourth British driver to win a Formula One race this century. He eventually finished ninth.

Hamilton, in isolation after contracting coronavirus and facing a race against time to be available for the Abu Dhabi Grand Prix on Sunday, is out of contract at the end of the month. The Briton, 35, is expected to sign a new deal.

Valtteri Bottas, who endured a miserable evening in Bahrain, was confirmed as a Mercedes driver for the 2021 campaign earlier in the year.

But after stepping up from Williams, Mercedes boss Toto Wolff hailed Russell’s display as “a new star being born”.

“The best way to do your talking is on the track,” said Mercedes junior driver Russell. “This is a performance industry and I hope this weekend has cemented Mercedes’ views regarding me.

“Mercedes have supported me since the end of 2016 – they have followed my whole career very closely – and hopefully this is just another step on the ladder.

“I guess from Toto’s perspective, hopefully I have given him a headache, not just for 2022, but maybe sooner.”

Russell could be handed another chance at the wheel of the fastest machine in F1 history this weekend.

Although Wolff reported Hamilton’s condition is improving, the seven-time world champion must return a negative Covid-19 swab before he is allowed to travel to Abu Dhabi.

And even then, he will await to see if the Abu Dhabi authorities will allow him to enter, with strict Covid-19 protocols in place for this weekend’s season-ending race.

The F1 world flew to Bahrain from Abu Dhabi on Monday on 10 charter planes ahead of Yas Island being put into lockdown. Hamilton must serve 10 days of quarantine in Bahrain, meaning the earliest he could possibly travel is Thursday.

“If he meets the entry requirements of the respective governments, and complies with the testing protocol by returning a negative test prior to entering the paddock, then there is no problem from our perspective. As long as the driver participates in practice [on Friday] or qualifying [on Saturday] he is permitted to race.”

Following his statement last Tuesday, Hamilton has not provided an update on his condition.

Russell added: “I would love to get the chance again in Abu Dhabi. I can build off the momentum of this weekend and deliver something decent.

“I could have been off the pace in Bahrain and fluked a podium, but I would not have been as satisfied as I am now because I know it was a well-executed weekend.

“With more and more races under my belt in this car I will just get stronger. I am going to wake up disappointed but I will have my head held high.”