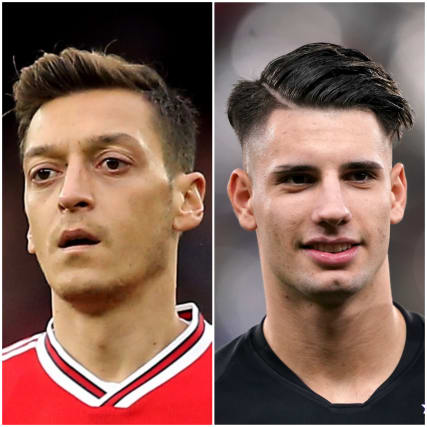 Mesut Ozil will reportedly stay at Arsenal until at least next summer despite being excluded by Mikel Arteta. And the Daily Express says the World Cup winner is confident he will be able to secure a contract with another top team once he leaves the Gunners. The 32-year-old attacking midfielder believes he can still command big money in Europe, particularly in Italy, while the MLS also remains a possibility.

Staying at the Emirates, club bosses are considering trying to sign Dominik Szoboszlai in January. The Mirror reports the Gunners want creativity in the middle of the pitch and could have their hand forced by Real Madrid sniffing around the Hungary international. The 20-year-old plays on the wing and can be used in the midfield, which is reported to have made him attractive enough for Real boss Zinedine Zidane to personally call him to tempt him away from Red Bull Salzburg.

Manchester United have their eyes on the Spanish capital and they like the look of Kieran Trippier. The 30-year-old, who captained England earlier this season, will have a year remaining on his Atletico Madrid contract next summer and the Telegraph says United could be tempted to sign him.

Chevrolet are willing to help Cristiano Ronaldo return to Old Trafford. The Sun cites Auto Esporte as saying United’s shirt sponsor is willing to help finance the Portuguese coming back to the club where he built his career between 2003 and 2009. The 35-year-old is the highest-paid player at Juventus, who are looking to offload him as they search for savings amid the pandemic.

Thiago Almada: United are the top candidates to sign the midfielder, 19, from Argentina’s Velez Sarsfield, according to Team Talk, which cites Spanish outlet Todo Fichajes.