England tour of South Africa abandoned due to coronavirus concerns 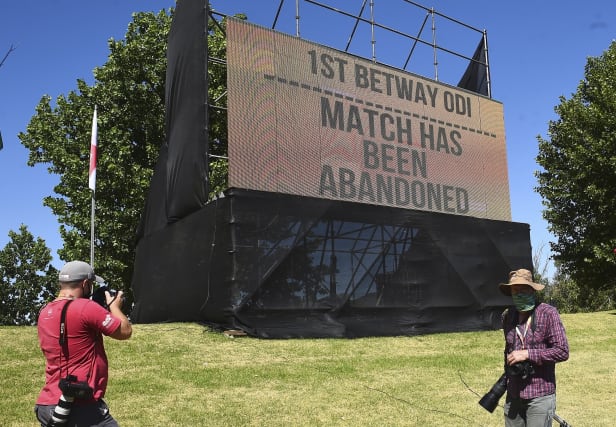 England's tour of South Africa has been abandoned "to ensure the mental and physical health" of both sides following concerns over a coronavirus outbreak at the teams' shared base near Cape Town.

The increasingly inevitable conclusion was reached by the respective boards on Monday afternoon after three failed attempts to get the one-day series up and running with scheduled matches being scrapped three times in the past four days.

Concerns over the integrity of the so-called 'bio-secure environment' at the five-star Vineyard Hotel in Newlands have been growing over the past fortnight and the rising incidence of positive cases, up to seven in total, ended any hopes of further cricket being played.

One Proteas player tested positive after the Twenty20 series – which England won 3-0 – leading to an initial postponement of the first ODI, but the news that two unnamed members of the touring party had also received 'unconfirmed positives' alongside two members of hotel staff, raised the alarm levels.

England's medical team, led by Dr Moiz Moghal, asked for independent analysis of their samples having suspected potential 'false positives' from the pair, who are both understood to be asymptomatic. If verified the duo may now be forced to remain in the hotel until a mandatory 10-day quarantine is over – with anyone classified as a "close contact" also facing the prospect of remaining in the country while other travel home.

A joint statement read: "Cricket South Africa (CSA) and the England and Wales Cricket Board (ECB) have agreed to postpone the remaining matches in the current men's ODI Series. The decision was taken jointly by the two Boards to ensure the mental and physical health and welfare of players from both teams.

"The CSA and ECB will now work together to determine when the three-match Series, which forms part of the ICC Cricket Men's Super League, can take place in the future."

Tom Harrison, ECB chief executive, who has been leading talks from England, said: "We have always maintained that the welfare of our players and management is paramount.

"We were concerned about the potential impact that recent developments might have on the well-being of the touring party, and so after consultation with Cricket South Africa, we have jointly made the decision to postpone the remaining matches in this series, in the best interest of the players' welfare.

"I would like to thank Cricket South Africa for their support and understanding on this matter and look forward to working with them to identify a time when we can return to play these fixtures in the future."

CSA's acting chief executive, Kugandrie Govender, added: "The concern over the mental health impact of recent events on all involved is not one that we as CSA or the ECB take lightly, and the decision to postpone the tour is the most responsible and reasonable course of action for us."

England's previous overseas assignment, a two-Test trip to Sri Lanka in March, also ended with the tourists leaving early as the pandemic began to wreak havoc with the global sporting calendar.

Meanwhile, a potential source of dispute has emerged locally after it was reported by ESPNCricinfo that England had trained in a net practice area at Newlands that was not initially cleared for use.

The area is in part of the ground currently under reconstruction and is open for tradesmen. The ECB issued a statement regarding those claims, criticising the quality of the pitches otherwise available and stressing all protocols were followed correctly.

It read: "On arrival at Newlands on 3 December, we advised the venue that the three nets provided on the main pitch were not of a standard for conducive practice, as per the Memorandum of Understanding signed by the respective boards. Batsmen were unable to face seam bowlers on the nets on the main pitch as the surfaces were rendered and unacceptable.

"We requested with CSA that we would like to use the practice nets and that we would create a security cordon to ensure the players and coaches could enter the facility safely, as done previously on 28 November. This was confirmed by England's Security Team, the Team Operations Manager and the Team Doctor. We were satisfied with this outcome and we were able to practice in the net facility safely.

"The team also used the main outfield for fielding drills, a seam bowlers bowl through pitch and a number of nets were used for range-hitting against spin bowlers and coaches throws. As far as the England touring party are concerned, the safety and health of our players and coaches was not compromised."

The mistakes that contributed towards Frank Lampard’s Chelsea downfall

Marcelo Bielsa: Leeds only focused on own form ahead of Newcastle clash