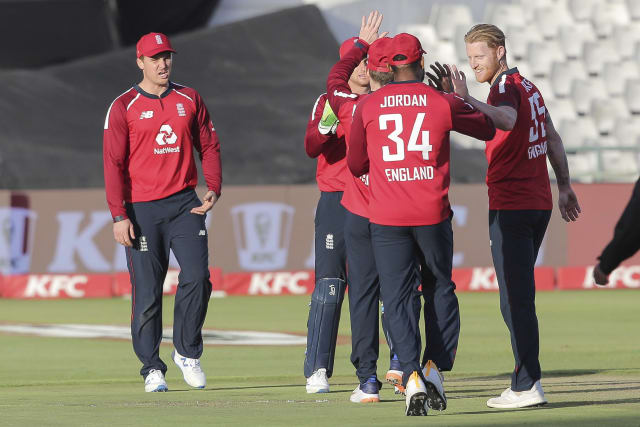 England’s tour of South Africa was cancelled on Monday due to a mounting sense of anxiety about the presence of coronavirus in the team hotel, leaving two members of the travelling party awaiting the results of follow-up tests.

When the unnamed duo tested positive over the weekend the writing was on the wall for the trip, which started with England sealing a 3-0 whitewash in the Twenty20 leg before three attempts to get the ODI series off the ground had to be aborted.

Since convening for the tour three South African players and two members of hotel staff have also tested positive for Covid-19, leading to a widespread lack of confidence in the so-called ‘bio-secure environment’ of the Vineyard Hotel in Newlands.

The England and Wales Cricket Board agreed with Cricket South Africa that it was no longer viable to stage the remaining matches with doubts firmly sowed, but the team’s medical staff remain hopeful of showing that both cases in their camp were ‘false positives’.

Both individuals returned negative samples when given the less sophisticated rapid turnaround tests and were then subject to the full PCR test, with results due on Tuesday morning.

Should they get the all-clear they will be free to leave with the rest of the squad on Thursday, but verified positives would lead to them quarantining in their rooms for at least another week.

Ashley Giles, managing director of men’s cricket and the ranking ECB official on the ground, has vowed to remain in South Africa with anyone who is obliged to isolate.

“It’s very much fingers crossed that they had false positives. We certainly don’t want to be leaving any part of the group behind,” he said.

“I won’t be leaving them here, I’ll be staying as well. I can’t leave those guys behind and we’ll probably have some medical cover as well.”

Explaining the decision to end the the tour, Giles focused on the psychological strain that has been placed on the group since cricket resumed under strict bubbles conditions over the summer.

“There’s clearly concern when infections spring up in what is a supposed to be bio-secure environment. That definitely creates a level of anxiety and nervousness,” he said.

“At the moment I don’t think there’s anyone who can tell us where these instances have sprung up from. In our group it created a great deal of anxiety. It came down to a well-being thing in the end.

“I don’t think it’s the last three weeks, it could be the last eight or nine months. These guys have been living in bubbles for long periods of time and their mental health and well-being is the absolute priority for us.

“If we consistently say that’s the most important thing for us, when we’re tested we can’t move away from that.”

Asked if players would be asked if they were comfortable about travelling in the new year, with planned visits to Sri Lanka and India, Giles added: “Absolutely. On the back of this an important part of it will be mental health screening.

“All of us want this period to be over sooner rather than later. In the meantime, post-Christmas we are going to have to manage our bubbles well and manage our people really well.”