Caoimhin Kelleher keeping feet on the ground after Liverpool breakthrough 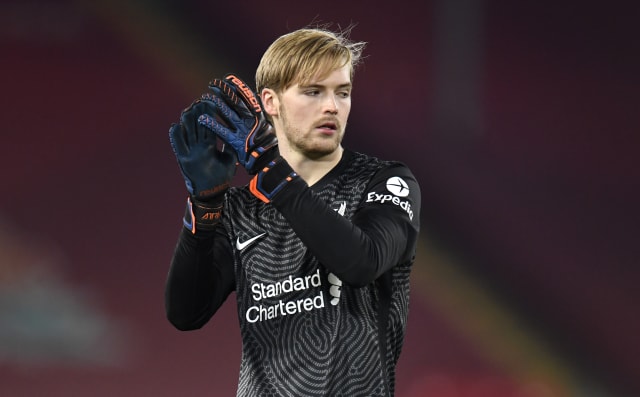 Liverpool’s rookie goalkeeper Caoimhin Kelleher is trying to take his rapid rise in his stride.

The Republic of Ireland Under-21 international has marked his debuts in arguably club football’s two biggest competitions – the Champions League and Premier League – with two clean sheets after putting in another competent display in the 4-0 win over Wolves.

Kelleher, who only turned 22 a fortnight ago, is standing in for the injured Alisson Becker having been promoted to number two ahead of the previously established Adrian.

He has not put a foot – or a glove – wrong in 180 minutes while also producing some great saves, including one to deny Daniel Podence in the first half in front of a Kop which had, for the first time since March, fans in attendance.

But the Irishman is also doing a good job of keeping his feet on the ground.

“I’m just trying to be there for the team to help them out in those moments and thankfully again I was able to make those saves and get the clean sheet,” he told liverpoolfc.com.

“To get the clean sheet, for me and the back four, is the most important thing for us. We’ve done our job then.

“From the first minute we really were on fire and we played really well. It was top class.

“We scored four goals (and) could maybe have had a few more as well. It was a great all-round team performance.”

It was a fitting way to mark the occasion of having supporters, albeit only 2,000, back inside the stadium to see the summer’s Premier League winners for the first time.

“It was obviously amazing. It’s been so long without them that it felt kind of strange to see them, but it was such an amazing feeling to have them back in the stadium,” added Kelleher, who may find himself back in a more familiar position on the bench for Wednesday’s Champions League dead rubber against Midtjylland.

“The support they give, honestly, is different class. You saw how we perform when they’re there, so to have them back was a real plus.”

The return of fans was one of many positives Kelleher’s performance included, in a match in which Liverpool were so in control the victory looked easy.

Manager Jurgen Klopp struggled to pick out one element which pleased him the most on a night which also saw the return from injury of Trent Alexander-Arnold and Naby Keita.

“Plenty of sensational individual performances, from the young boys it was really great,” said the Reds boss.

“Neco Williams, we only took off because obviously the plan of Wolves was to bring (Adama) Traore on the left wing and maybe Neco makes one more foul and then maybe he gets the second yellow.

“That was the only reason; he played really, really good.

“Sadio also had a few moments where he controlled, which I still don’t understand how he can do that, these kind of things.”

For Wolves boss Nuno Espirito Santo it was a disheartening display.

He knows he has to find a way around the unfortunate problem of being without key striker Raul Jimenez, recovering from a fractured skull sustained in Wolves’ previous match.

“Not having Raul is a blow. We were trying to occupy the same position with different players, but we were not able to do it,” he said.

“But we must find solutions inside of the team so we can keep on progressing. That is the situation now, so it is up to us to find the right solutions.”