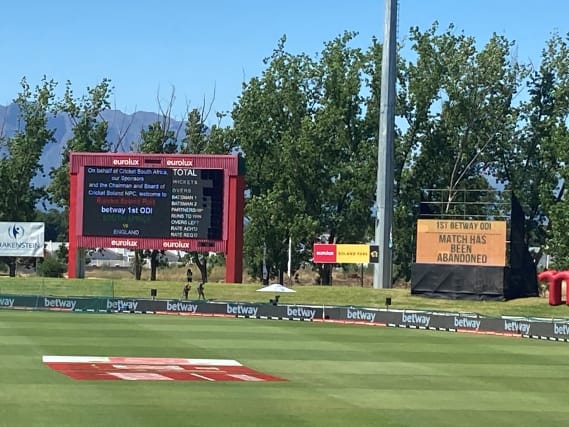 England’s tour of South Africa could be abandoned if two “unconfirmed” cases of Covid-19 in their camp are verified, with difficult decisions ahead not just about the series but also what the team does next.

The first of three one-day internationals had already been postponed on Friday after a third Proteas player tested positive and it was scrapped entirely on Sunday morning when it emerged that two members of the England party and two members of staff at the teams’ shared hotel in Cape Town had joined the growing outbreak.

The series had been due to continue with a double-header at Newlands on Monday and Wednesday, but the viability of those fixtures is firmly in doubt.

England’s medical staff are understood to believe there is a possibility of so-called ‘false positives’ and have sent the swabs for independent analysis. Should they come back all clear the best-case scenario would be two matches, on Tuesday and Wednesday, before the planned departure on Thursday.

That would still require the agreement of players and coaching staff, far from a given amid deepening concerns over the effectiveness of what is supposed to be a bio-secure environment but has proved to fall short of that descriptor. At least one of the staff members to come down with the illness is believed to have worked closely with the England team.

In the event that England’s pair of positives are confirmed it seems highly likely that the tour would be over and discussions would instead turn to quarantine and isolation. Both individuals, who are thought be asymptomatic at present, would need to remain in their rooms for a total of 10 days following their diagnosis, so could not join the charter flight home.

The England and Wales Cricket Board would also need to identify anyone who qualifies as a close contact – defined as spending 15 minutes or more in an indoor environment without social distancing – and isolate them similarly. With several players having spoken out recently about the problems of bubble fatigue, that would be a wholly undesirable turn of events.

An additional concern exists for Jason Roy, Sam Billings, Tom Curran and Lewis Gregory, who all have deals in the Big Bash League and were due to travel straight to Australia.

Ashley Giles, managing director of England men’s cricket, said on Sunday: “We regret that we are unable to play in today’s ODI, but the welfare of the players and support staff is our primary concern and whilst we await the results of further tests the medical advice from both teams was that this game should not take place.

“We remain in constant dialogue with Cricket South Africa and will continue to work closely with them to determine how best to move forward.”

An additional statement from the ECB explained: “As a precaution, England players and management underwent an additional round of PCR tests on Saturday evening. Following the test results, two members of the England touring party have returned unconfirmed positive tests for Covid-19.

“The players and management are now self-isolating in their rooms until further advice from the medical teams. A decision on the remaining matches in the series will be taken once the results of the tests are ratified independently by medical experts.”

Former Proteas captain Graeme Smith, now their director of cricket, said: “CSA is doing everything in our power to ensure that our top priority, which is the health, safety and welfare of players, support staff and all involved in this series is safeguarded. We are deeply regretful of the situation we find ourselves in after the amount of time and energy that has been put in place to host a successful tour.”

Earlier, the general manager of the Vineyard Hotel, Roy Davies, had issued a statement detailing events at the five-star establishment. In it he said the positive tests among the workforce came through on Friday, prompting England’s unplanned screening session.

“At this stage, it is not clear how the two staff members became infected as neither have left the bio-secure area since 16 November and they do not work on the same team or in the same zone area,” said Davies.

“Our Covid response team is endeavouring to establish all the facts and contact tracing is underway. Those infected are isolated in on-site apartments outside the bio-secure area some distance from the hotel, which have been kept sterilised and available for this purpose.”

Former England captain Nasser Hussain told Sky Sports it would be “a complete and utter mess” if members of the touring party test positive for Covid-19.

Hussain said: “You have to hope they are false positives. If they are proven to be positive, it is a complete and utter mess because what do you do with those two England players or backroom staff?

“They will need to stay out here for two weeks and you know when you’re in a team, you are not going to turn around to your team-mate and say ‘we are off home for Christmas, you have to stay out here’.

“So, it becomes a real mess. Fingers crossed they get retested and it is an anomaly, but the players will be increasingly concerned the bubble has been breached and counting down the days until Thursday and their flight home.”