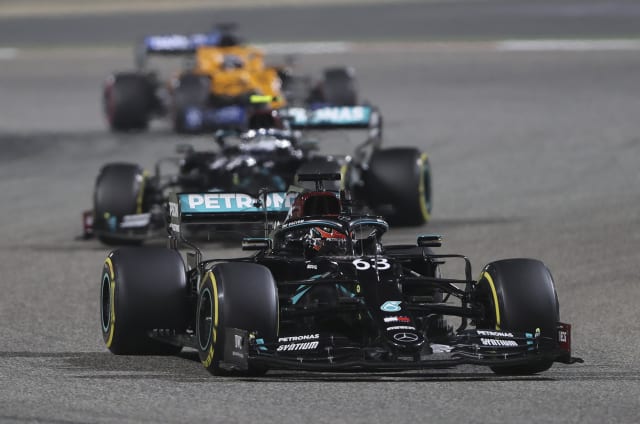 George Russell was robbed of a probable victory on his Mercedes debut following a puncture in the closings stages of the Sakhir Grand Prix.

Sergio Perez took the chequered flag on an extraordinary evening in Bahrain to claim the first win of his career ahead of Renault’s Esteban Ocon and Racing Point team-mate Lance Stroll.

Russell, promoted to the fastest Formula One machine in history after Lewis Hamilton was struck down with coronavirus, was hunting Perez down and trailed the Mexican by just two seconds before he was forced to stop for new rubber.

Only moments earlier, Russell, a 3000-1 outsider to win here in the desert before Hamilton was sidelined for the first time in his 256-race career, dropped down the order following a Mercedes pit-stop howler.

The 22-year-old held a commanding five-second lead over team-mate Valtteri Bottas when Mercedes called both of their drivers in for new rubber after a safety car was deployed following a spin by rookie Jack Aitken.

But their was a mix-up among the Mercedes mechanics as they mistakenly put Bottas’ tyres on Russell’s car. That meant Russell had to come into the pits again on the following lap dropping him to fifth.

“You should now have a tyre advantage,” Russell’s race engineer for the weekend, Pete Bonnington told the young Briton. “I f****** hope so,” Russell replied.

The safety car pulled in with 19 of the 87 laps remaining and Russell – with the bit between his teeth – wasted no time in moving up the order, passing Bottas, Lance Stroll and Esteban Ocon inside two laps.

He set about chasing Perez, taking more than one second out of the Racing Point man’s lead before his puncture. It allowed Perez to cruise to a 10-second victory with Russell eventually crossing the line in ninth.