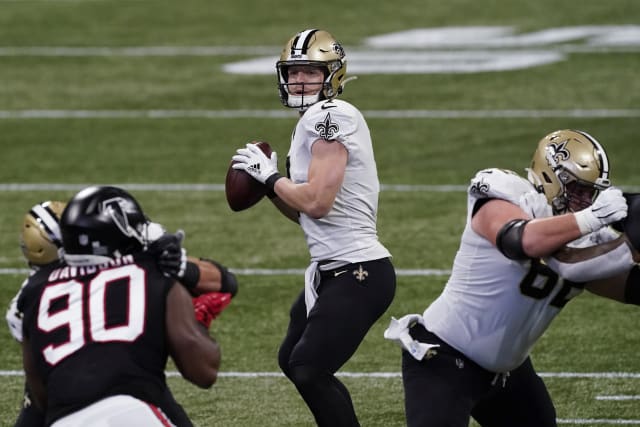 The New Orleans Saints became the first NFL team to secure a playoff spot after defeating the Atlanta Falcons 21-16.

The victory was the Saints’ ninth consecutive win as Taysom Hill filled in successfully again for Drew Brees, throwing his first two NFL touchdown passes as a starting quarterback inside the first half.

Hill had made his first career start on November 22 and has continued to impress since Brees’ injury.

The New York Jets almost brought their 344-day winless run to an end only to fall at the final hurdle against the Las Vegas Raiders.

Derek Carr threw a 46-yard touchdown pass to rookie Henry Ruggs in the final seconds of the fourth quarter as the Raiders won 31-28.

The Jets’ defeat keeps them in line for the number one draft pick in next season’s draft at 0-12.

The Bengals led 7-6 at half time after their wide receiver Tyler Boyd and opposing cornerback Xavien Howard were ejected for a sideline scuffle.

The Dolphins hit back, eventually going on to win the game despite losing receivers DeVante Parker and Mack Hollins in an incident that saw Bengals safety Shawn Williams also dismissed.

The Minnesota Vikings clinched a narrow victory over the Jacksonville Jaguars in overtime.

The Jaguars took an early 9-0 lead as they searched for their first victory since the opening weekend of the season but the Vikings came back behind 120 yards rushing for Dalvin Cook and 121 receiving from Justin Jefferson.

The Cleveland Browns overcame the Tennessee Titans in an entertaining 41-35 win with Baker Mayfield throwing for a season-high 334 yards.

Mayfield’s four touchdown passes came in the first half, with the Browns taking a 31-point lead before just holding on to win their fourth straight game.

Matthew Stafford threw for 402 yards and three touchdowns for the Lions, who bounced back from a Thanksgiving day defeat to the Houston Texans.

Detroit were behind 30-20 early in the final quarter before they turned the game around with touchdowns from Marvin Jones and Adrian Peterson, aided by a Mitchell Trubisky fumble as the Bears fell to their sixth straight defeat.

The Indianapolis Colts secured a narrow 26-20 win over the Houston Texans.

Philip Rivers threw two touchdown passes as the Texans missed a late chance to seal victory when quarterback Deshaun Watson, who had previously been sacked for a safety to give up the only points of the second half, fumbled a bad snap in the red zone.