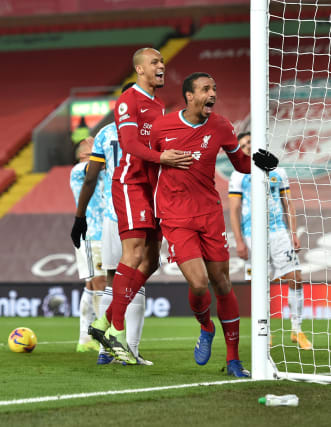 Liverpool celebrated the return of fans to Anfield with a comfortable 4-0 win over Wolves in a Premier League match former Red Conor Coady will want to forget in a hurry.

This was the first time the 2,000 fans inside the ground had seen the Reds in the flesh since ending their 30-year wait for the title in the summer and they did not go home disappointed.

Goals from Mohamed Salah – whose 84th in the Premier League matched the number scored by Cristiano Ronaldo – Georginio Wijnaldum, Joel Matip and a Nelson Semedo took Jurgen Klopp’s side back level on points with leaders Tottenham.

There was even the added bonus of seeing the return from injury of Trent Alexander-Arnold and Naby Keita.

Coady, though, had a rare off day for him which began with him making a mistake for the crucial opener and then being called a cheat by the home fans after appearing to dive to get a penalty, which although successful was subsequently overturned by VAR.

With the Kop having 1,500 fans and the Main Stand 500 the atmosphere was lively.

However, the loudest cheer was reserved for Liverpool’s opener in the 24th minute, even if it came via an error from one of their own.

Coady, a graduate of Liverpool’s academy and a Reds fan, tried to control Jordan Henderson’s ball over the top on his chest when it required a header and the ball bounced away far enough for Salah to nip in and fire home his first goal in four matches.

The Wolves defender buried his head in his shirt. He should have been repeating the feat at the other end on the stroke of half-time when referee Craig Pawson awarded a penalty after the centre-back went down after Sadio Mane’s attempted overhead clearance.

Liverpool’s players were incensed, provoking chants of “cheat” from the Kop, and after the VAR official Jon Moss looked at the incident and advised checking the pitchside monitor, Pawson rescinded the spot-kick after seeing there was no contact.

Coady escaped without a caution for diving but not the censure of his once-beloved Kop, who continued questioning his honesty.

Klopp’s side moved up a gear after the break but the best move of the match did not bring the second goal as Salah’s raking 40-yard diagonal dropped on to the toes of Andy Robertson, whose first-time shot was steered wide by Mane.

But the goal was not long in coming with Henderson again the provider, launching a quick counter-attack down the middle which picked out Wijnaldum who, with Mane and Salah in support, went alone and found Rui Patricio’s top left corner.

Perhaps the biggest celebration of the night came from Matip in the 68th minute, heading home Salah’s inswinging cross four yards out before reacting wildly in front of the Kop.

And as the “Mane scoring” line died away from the “Merry Christmas Everton” song it appeared the Senegal international responded with impeccable timing by slotting home Alexander-Arnold’s cross, but Wolves defender Semedo was adjudged to have got the final touch.

Caoimhin Kelleher made his Premier League debut just five days after his first European start and enjoyed another clean sheet.

It was another confident performance from the Republic of Ireland Under-21 international in the absence of Alisson Becker, his best saving seeing him tip Daniel Podence’s curling chip around a post at full-stretch.