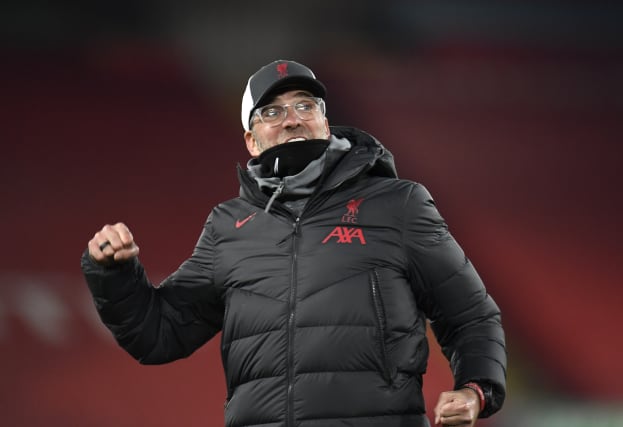 Liverpool manager Jurgen Klopp described the return of fans to Anfield as an emotional “goosebump” moment as his players responded with the perfect performance against Wolves.

Goals from Mohamed Salah, Georginio Wijnaldum, Joel Matip and a Nelson Semedo own goal wrapped up a victory which was far more comfortable than even the 4-0 scoreline suggested.

There were so many other positives with a second successive clean sheet for Caoimhin Kelleher, on his Premier League debut, and the return from injury of Trent Alexander-Arnold and Naby Keita.

But it was the 2,000 supporters inside the ground that really made it for Klopp, who celebrated the victory with his trademark triple fist-pump in front of the Kop.

“Getting out of the dressing room and warming up was a proper goosebump moment,” he said.

“When the people saw the first player they got quite noisy and the rest of us thought ‘Oh my God, that sounds really loud’.

“It was very emotional. After 10 months without that it is a wonderful, wonderful sign.

“During the game was emotional, it was so nice to hear ‘You’ll Never Walk Alone’.

“Having people in the stadium is another really good sign. Hopefully we can build on it as a society, not just a football society.

“People in the stadium were in the best shape and that was really nice. If none of my players or medical department tell me any player was injured it was the perfect night.”

A large part of Klopp’s happiness came from the performance, with Wolves – who won at Arsenal last week – barely in the game.

“Wolves couldn’t get into the game tonight and I think that was because of the way my boys played. It was a really, good high-level performance,” Klopp added.

Wolves boss Nuno Espirito Santo was less than impressed with his side’s display.

“We didn’t perform well, Liverpool performed better than us. That is a reflection of the performance on the pitch,” he said.

“It was not a good performance. We were organised but not as organised in the second half, a poor second half.”

There was better news on the health of striker Raul Jimenez, who is out of hospital after a fractured skull against Arsenal a week ago.

“Raul is back home and is recovering,” Nuno added.

“We have already spoken and we will see each other soon. Him being back home is very good news and we must give him time to get healthy.

“He is recovering and he has been in contact with all his team-mates like he was before, the only thing that is missing is he is not here with us.”