George Russell ‘absolutely gutted’ after near miss on Mercedes debut 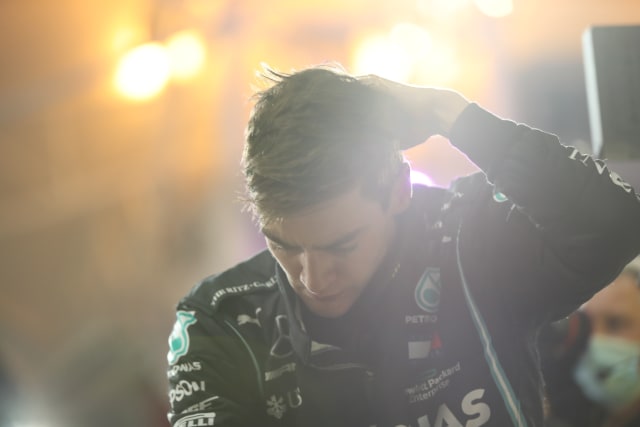 George Russell fought back the tears after he was twice robbed of a fairytale victory as Lewis Hamilton's stand-in for Sunday's Sakhir Grand Prix.

The crestfallen Briton, 22, collapsed on the ground at the side of the Bahrain paddock following a race in which a pit-stop blunder – and then a puncture with just nine laps remaining – denied him a remarkable win on his Mercedes debut.

He crossed the line in ninth. Sergio Perez took advantage of the chaos to claim a maiden win in his 190th appearance.

In an emotional radio message following 87 laps of frenetic action under the lights of the Sakhir Circuit, Russell's voice cracked as he spoke to his temporary team.

Mercedes team principal Toto Wolff came on the radio to apologise. Later, the Austrian said: "Overall for us it was a colossal f***-up. I know I'm not allowed to say that but it was."

Russell, promoted to the fastest Formula One machine in history with seven-time world champion Hamilton sidelined after contracting coronavirus, had been in complete control of the penultimate round of the championship.

But his fine work was undone with just 25 of the 87 laps remaining in the desert. Russell was five seconds clear of Valtteri Bottas when Mercedes called both of their drivers in for new rubber after a safety car was deployed following a spin by rookie Jack Aitken.

But Russell's pit crew did not hear the message. When Russell arrived in his marks, Bottas' tyres were put on the Briton's car. That meant Russell had to come into the pits again on the following lap, dropping him to fifth.

"You should now have a tyre advantage," Russell's race engineer for the weekend, Pete Bonnington told the young Briton. "I f****** hope so," Russell replied.

The safety car pulled in with 19 of the 87 laps remaining and Russell – with the bit between his teeth – wasted no time in moving up the order, passing Bottas, Lance Stroll and Esteban Ocon inside two mesmerising laps.

He set about chasing Perez, taking more than one second out of the Racing Point man's lead, before he suffered a rear-left puncture.

"I cannot really put it into words," said Russell, who had been a 3,000-1 outsider to triumph on Sunday before he was handed the keys to Hamilton's championship-winning machine.

"Jumping out of the car, it wasn't a nice feeling to be honest. I have had races where I have had victories taken away from me, but twice? I just couldn't believe it.

"We had the muddle up in the pit-stop and that put us on the back foot. I had to overtake, and we could have caught Sergio because we had such tyre advantage and the car was so quick.

"I am gutted, but incredibly proud of what we achieved and happy to have had the opportunity."

Russell first discovered he could be replacing Hamilton following a 2am bathroom phone call with Wolff on Tuesday.

And after topping both practice sessions on Friday, before missing out on pole to Bottas by just 0.026 seconds on Saturday, Russell then delivered a performance way beyond his tender years.

Russell exploded off the start line, flying past pole-sitter Bottas with ease to take the lead on the run down to turn one.

Indeed, after Ferrari's Charles Leclerc crashed into Perez and Red Bull driver Max Verstappen smashed into the tyre barrier as he attempted to avoid the pair, Russell's first-lap lead over Bottas stood at three seconds.

He was then eight clear of the Finn following what was scheduled to be the only round of stops. Russell would have become only the fourth British driver to win an F1 race this century, following David Coulthard, Jenson Button and Hamilton.

"I saw George in his room and it was very emotional because if you are in your first race in a Mercedes and you should have won it following a monumental drive, then there is not a lot you can say," said Wolff.

"It is not going to be his last attempt to win a race. It is just the beginning of a fairy-tale that didn't work out today, but I would say that a new star is born."

Russell could be in the Mercedes cockpit in Abu Dhabi next Sunday. Hamilton returned a positive Covid-19 test on Monday and is isolating in Bahrain.

However, Wolff said his star driver is in line to return for the season finale providing he returns a negative result. "Lewis said he is a bit better today and feels he has made a big step," Wolff concluded.