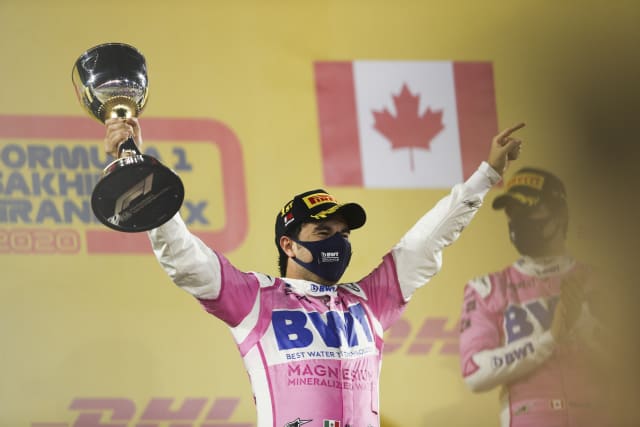 Sergio Perez said he hoped he was not dreaming after storming from last to first to claim his maiden Formula One win at the 190th attempt in Sunday’s Sakhir Grand Prix.

Perez, 30, was clipped by Ferrari’s Charles Leclerc on the opening lap – and after stopping for repairs he found himself at the back of the field.

But the Mexican took advantage of a chaotic race which George Russell had been on course to win before a Mercedes pit-stop blunder, and then a late puncture, derailed his chances.

Perez crossed the line 10 seconds clear of Renault’s Esteban Ocon, with Lance Stroll third in the other Racing Point.

“I’m speechless,” said Perez. “I hope I’m not dreaming because I have dreamed for so many years of being in this moment.

“Ten years it has taken me to win. Ten years. Incredible. I don’t know what to say.

“After the first lap, the race was gone. But it was all about not giving up, recovering, going for it and just making the best of what I possibly could.”

As it stands, Perez is without a drive in F1 next year after being dropped by Racing Point. Four-time world champion Sebastian Vettel will take his seat at the rebranded Aston Martin team in 2021.

Perez also missed the British and 70th Anniversary Grands Prix at Silverstone in August after he contracted coronavirus following a visit to see his mother in Mexico.

Perez added: “This season the luck hasn’t been with us, but we finally got it today and we won on merit.

“Yes, the Mercedes cars had some issues but in the end my pace was strong enough to hold George off.”