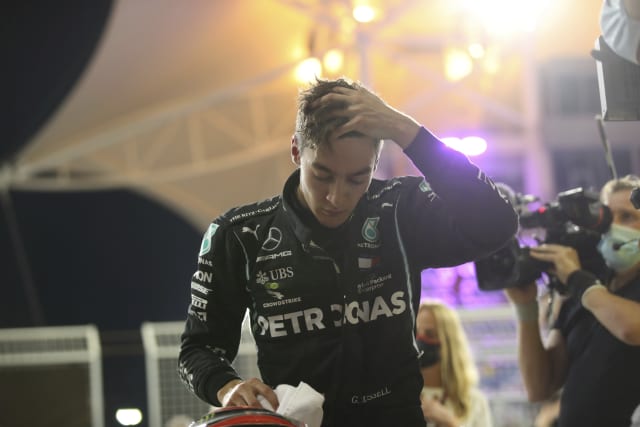 Russell fought back the tears after he was twice robbed of a fairytale victory as Lewis Hamilton’s stand-in at Mercedes and finished ninth.

The crestfallen Briton, 22, collapsed on the ground at the side of the Bahrain paddock following a race in which a pit-stop blunder – and then a puncture with just nine laps remaining – denied him a remarkable win on his Mercedes debut.

“I saw George in his room and it was very emotional because if you are in your first race in a Mercedes and you should have won it following a monumental drive, then there is not a lot you can say,” said Wolff.

“It is not going to be his last attempt to win a race. It is just the beginning of a fairytale that didn’t work out today, but I would say that a new star is born.”

Russell, who switched his Williams for the fastest Formula One machine in history with seven-time world champion Hamilton sidelined after contracting coronavirus, had been in complete control of the penultimate round of the championship.

But his fine work was undone with 25 of the 87 laps remaining in the desert.

Russell was five seconds clear of team-mate Valtteri Bottas when Mercedes called both of their drivers in for new rubber after a safety car was deployed following a spin by rookie Jack Aitken. But Russell’s pit crew did not hear the message.

When Russell arrived in his marks, Bottas’ front tyres were put on the Briton’s car. That meant Russell had to come into the pits again on the following lap, dropping him to fifth. Mercedes were later fined £18,000 for the rule breach.

Russell – with the bit between his teeth – wasted no time in moving up the order, passing Bottas, Lance Stroll and Esteban Ocon inside two mesmerising laps. He set about chasing Sergio Perez, taking more than one second out of the Racing Point man’s lead, before he suffered a rear-left puncture.

Perez went on to win his maiden grand prix in his 190th appearance.

“I cannot really put it into words,” said Russell, who had been a 3,000-1 outsider to triumph on Sunday before he was handed the keys to Hamilton’s title-winning machine.

“Jumping out of the car, it wasn’t a nice feeling to be honest. I have had races where I have had victories taken away from me, but twice? I just couldn’t believe it.

“At one point I was eight seconds clear of Valtteri and I thought this is too good to be true and it turned out it was.”

Russell could again be in the Mercedes cockpit in Abu Dhabi on Sunday, with Hamilton isolating after he returned a positive Covid-19 test last week.

However, Wolff said Hamilton is in contention to return for the season finale, providing he returns a negative result.