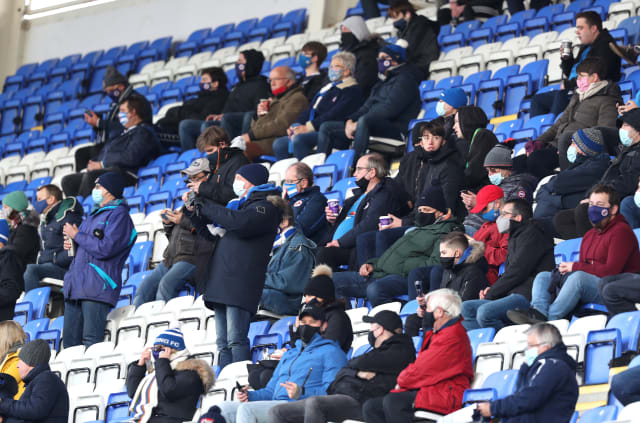 Reading welcomed fans back to the Madejski Stadium for their lunch-time kick-off as the limited return of crowds to stadiums continued on Saturday.

The 12.30pm clash with Nottingham Forest saw the ground’s doors opened to supporters for the first time since the coronavirus pandemic took hold in March.

Government restrictions allowed for up to 2,000 fans at the Sky Bet Championship match, as was the case for West Ham’s clash with Manchester United at the London Stadium at 5.30pm, which was to be the first Premier League game with supporters in attendance this season.

The same figure was also allowed for the 8pm kick-off between Leeds and Chelsea at Elland Road.

EFL games kicking off at 3pm where fans were permitted included Brentford against Blackburn in the Championship, the Bees’ first ever match at their new Brentford Community Stadium home with supporters attending.

League Two Harrogate were set to play in front of their fans for the first time as a Football League club, with 500 allowed into the EnviroVent Stadium for the visit of Forest Green.

West Ham boss David Moyes has welcomed the return of crowds, albeit just a fraction of those who could be in attendance at the London Stadium.

Moyes said: “I have to say it has been really strange not having fans – but I don’t know if it will be even stranger having only 2,000 back in a 60,000-seater stadium.

“We just want the supporters back. It is a start and the club have done a really good job in making sure that everything is safe and prepared, as have other clubs because we are fully aware of our responsibilities.

“Overall, it is great. I’m sure there will be some people disappointed they haven’t got a ticket just now, but there will be others who are really excited to come back to a game.”

United boss Ole Gunnar Solskjaer was also excited to play in front of spectators again, despite no away fans being allowed entry.

“It’ll be great playing in front of fans, we’re looking forward to it,” Solskjaer said.

“Of course we won’t have our fans there but we’ll just have to use the energy or thrive off the home fans and make them quiet hopefully.

“We’re looking forward to it. It’s great to see fans back in a stadium. Of course we want it back in Old Trafford as well and hopefully we’ll get that soon.

“Football is not the same, it’s not been the same, so great (to see some back).”