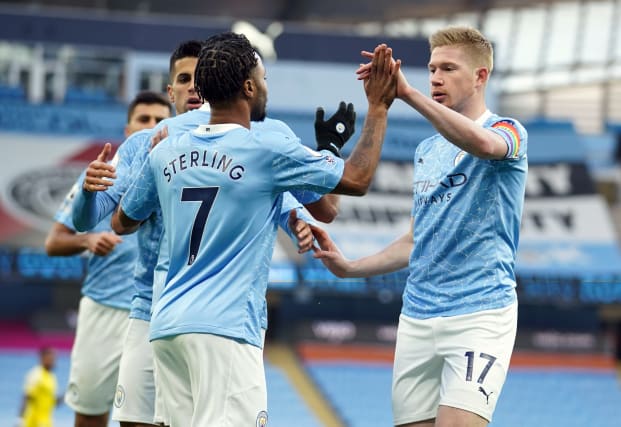 De Bruyne and Raheem Sterling left Scott Parker’s promoted side with a mountain to climb in what was also Guardiola’s 250th fixture at the helm as City won back-to-back league matches for the first time this season.

First Belgium international De Bruyne slid a perfectly-weighted pass into Sterling’s run to enable the England striker to fire City into a fifth-minute lead with his first goal in seven games.

Then the tables were turned when Sterling went to ground under defender Joachim Anderson’s challenge inside the penalty area and De Bruyne stepped up to make it 2-0 from the spot with just 26 minutes played.

De Bruyne rattled the crossbar five minutes after the restart, but with Fulham providing stiffer resistance after the break and keeper Alphonse Areola making a series of saves, City’s cutting edge largely deserted them.

However, they had done enough to climb into the top four to lay down the gauntlet for their fellow title hopefuls.

Dominic Calvert-Lewin’s 11th goal of the season spared Everton a fifth defeat in six league outings as the visitors came from behind to take a point at Burnley.

Robbie Brady had fired the home side into a third-minute lead at Turf Moor with his first goal since December last year following an error by Allan.

However, the Brazilian redeemed himself in first-half stoppage time when he won the ball from Ashley Westwood to allow Richarlison to send in a cross which was poked home by Calvert-Lewin.

England rivals Nick Pope and Jordan Pickford both made crucial second-half saves as the two sides pushed for the win, but ultimately had to make do with a point apiece.