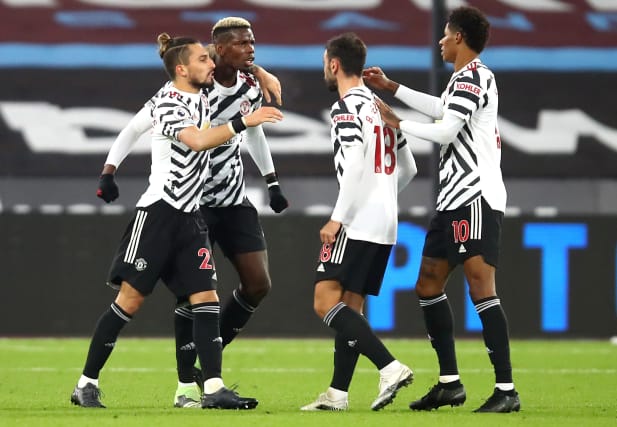 The Hammers led at half-time through Tomas Soucek, and could have been further ahead but for some dubious finishing.

However, the 2,000 West Ham fans inside the London Stadium, at the first Premier League match to have supporters present since March, went home disappointed after Bruno Fernandes, a half-time substitute, turned the match in the visitors’ favour.

Fernandes had a hand in all three goals as Ole Gunnar Solskjaer’s side made it five away wins out of five this season.

But it did not look like being Solskjaer’s day during a one-sided first half.

There was no doubt the crowd, however small, had immediately energised the home team.

Dean Henderson, making his first Premier League start in the United goal, blocked from Pablo Fornals in the opening minute before Jarrod Bowen had the ball in the net only to be pulled back by a late offside flag.

Fornals passed up two excellent chances to open the scoring with a volley into the sidenetting and another effort which came back off the foot of the grateful Henderson’s post.

Meanwhile, after nine months of fake crowd noise there was simple pleasure to be had in just hearing the genuine boos aimed at Edinson Cavani when he went down looking for a free-kick, or the authentic jeers towards Pogba for a mis-control by the touchline.

A West Ham goal was coming, and it duly arrived seven minutes before half-time when Aaron Cresswell swung in a corner.

Declan Rice flicked it on at the near post and Soucek slid in at the far post for his second goal of the season.

There was disbelief in the stands moments later when Sebastien Haller raced through and rounded Henderson, only to somehow stumble over his own feet instead of rolling the ball into an empty net.

Cavani’s first United start in the league ended at half-time, with Solskjaer sending on Rashford and Fernandes.

But Fernandes’ arrival had given United some much-needed impetus and both Scott McTominay and Rashford fired into the sidenetting.

The equaliser arrived in the 65th minute when Fernandes fed Pogba, who beat Lukasz Fabianski with a superb strike from 20 yards out.

West Ham felt the ball had gone out of play when Henderson cleared it up field but a VAR check – with no useful camera angle to speak of – allowed the goal to stand.

Moments later United took the lead and Fernandes was involved again, his backheel finding Alex Telles who whistled in a low cross for Greenwood to take a touch, spin and fire home.

Then Rashford was played through by Fernandes only to place his shot against a post, but the England man made no mistake 10 minutes from time.

Fernandes flicked the ball square to Juan Mata who found Rashford racing through again to round off the victory in style.