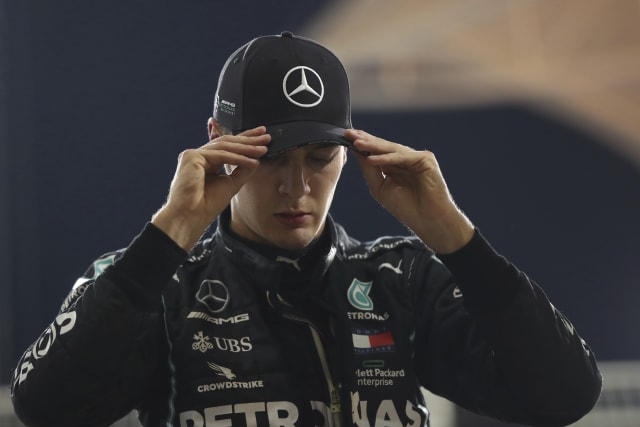 British driver George Russell narrowly missed out on a dream pole after he was edged to top spot by Valtteri Bottas for Sunday’s Sakhir Grand Prix.

Russell, 22, deputising for Lewis Hamilton following the seven-time world champion’s positive Covid-19 test, finished only 0.026 seconds slower than Bottas in the other Mercedes.

Russell improved with his final run under the lights of the Sakhir Circuit, but he could not do enough to usurp the Finn. Red Bull’s Max Verstappen will line up in third, just 0.056 sec behind Bottas. Ferrari’s Charles Leclerc finished fourth.

Hamilton has dominated this season, winning 11 of the 15 rounds, but his enforced absence here – the first Formula One qualifying session staged without the record-breaking Briton since the season-ending 2006 Brazilian Grand Prix – has made for an unpredictable affair.

Russell, a Williams driver by day, was handed a fairy-tale call-up after Mercedes team principal Toto Wolff called on him to fill Hamilton’s championship-winning cockpit.

And the driver from King’s Lynn in Norfolk has impressed, topping both practice sessions here on Friday, before only just missing out on pole.

“It has been incredibly tense with so much to learn and getting use to the car,” said Russell. “It felt really alien to begin with and it is a different way to drive. I needed to relearn how to drive this car fast.

“I was happy to get through to Q3 after final practice, and if you told me last week I would qualify second, I wouldn’t have believed you.

“Valtteri has pushed Lewis a huge amount in qualifying over the years and we know how great Lewis is so to be just behind Valtteri with three days preparation, I am pleased.

“I have got nobody in front of me, which I have not experienced for a long time, so it is going to be tricky. I will give it everything I have got.”

The sport is back in Bahrain for a second race in as many weekends but a new configuration of the Sakhir track is being used.

Registering at just 2.2 miles and effectively featuring only six corners, Bottas’ 53.37 second lap was the lowest since Niki Lauda put his Ferrari on pole for the French Grand Prix in Dijon 36 years ago in 58.79 sec.

Alexander Albon’s Red Bull future remains in doubt and a poor qualifying performance here will come as another blow to the London-born Thai. Albon was dumped out of Q2, finishing just 12th one place ahead of Sebastian Vettel whose Ferrari career has long since fizzled out. Britain’s Lando Norris also endured an unusually poor evening, finishing 15th.

Grosjean suffered burns to his hands in the extraordinary accident but remains hope he will be able to complete his career with one final appearance in Abu Dhabi.