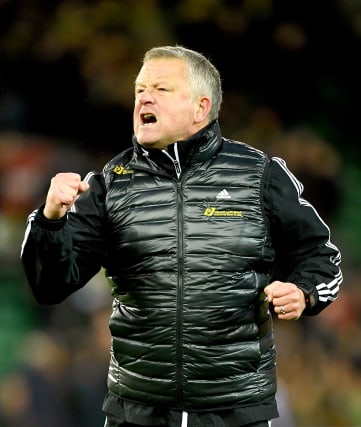 Chris Wilder thinks keeping Sheffield United in the Premier League this season will be the greatest achievement of his managerial career.

The Blades boss also believes managing to stay up again would represent the biggest moment in the club’s recent history.

United were a revelation last season on their return to the top flight, finishing ninth in the table, but are finding life much tougher during their second campaign.

Wilder’s side have earned only one point from their 10 matches and defeat at fellow strugglers West Brom last weekend was a a fifth straight loss.

Asked if survival this season would top promotion to the Premier League and be his greatest achievement as a manager, Wilder replied: “Yes, I think so.

“And I think from the club’s point of view too. It’d top anything the club has done for a long, long time.

“The club has had three years in the Premier League in 28-29 years, before we got promoted. Sometimes some clarity is needed about where we are at and what this club is fighting for.

“It’s all relative, as always, and there is a long way to go, but yes, it would be a big achievement for myself and this football club.”

Wilder, who took over as Blades boss in 2016 when the club was in League One, thinks injuries have hit his side hard this season and played a major part in their disappointing start to the campaign.

Key defender Jack O’Connell looks like being out for the rest of the season with the serious knee injury he suffered in September, while midfielder John Fleck and striker Lys Mousset have also missed large chunks of the season.

Fleck was absent for six weeks with a back problem while Mousset featured for the first time this campaign as a substitute at West Brom, having recovered from a rare toe injury sustained during pre-season.

“There would be no downside to us having a fully-fit squad and a settled squad, especially the way we play – it’s not just been chucked together,” said Wilder.

“Our recruitment is tailored to the way we play, we don’t switch formations constantly, our system relies on the players playing and showing a degree of consistency in terms of team selection, and we’ve missed some key players.

“We need everyone fit, it’s as simple as that. I think we’ve been really unfortunate in terms of injuries this season, all of them have been contact injuries: Fleck was, O’Connell was and Mousset was, it was a tackle.

“The injuries have been unfortunate, not down to conditioning or the way we work. But our success last season was down to consistency and continuity, especially in the back eight, and giving us a platform to have consistent performances and on the back of that results.

“We haven’t had that this season but we will get on with it, as we have been doing.”

Wilder will check on Enda Stevens and Ethan Ampadu ahead of the Leicester game.

Stevens has been nursing a knee injury in recent weeks and Ampadu missed the defeat at West Brom with a hip problem. Both defenders will be given until the last minute to prove their fitness.

Mousset made his long-awaited return from injury as a substitute at the Hawthorns. The striker will be involved again on Sunday but Wilder has said the Frenchman is not yet ready to start a game.