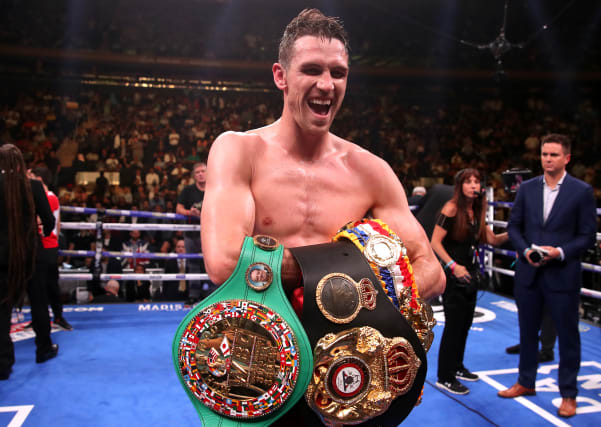 Callum Smith is aware a month’s notice for the biggest fight of his career is far from ideal but he believes the unique insight brother Liam can provide on Saul ‘Canelo’ Alvarez puts him at a distinct advantage.

Smith will make the third defence of his WBA super-middleweight title on December 19 against Mexican superstar Alvarez, who is regarded by many as the best active fighter, pound-for-pound, in the world.

Alvarez has won world titles in four divisions, from light-middleweight to light-heavyweight, and among his 53 wins in 56 professional fights is Smith’s older brother Liam, who was knocked out inside nine rounds four years ago.

Liam has unsurprisingly divulged everything he can to his unbeaten younger sibling ahead of a fight that was only made official on November 17 and will take place at Texas’ multi-purpose stadium the Alamodome.

“Nothing’s ideal, ideal would have been an announcement 12 weeks ago and I would have had a 10-week camp,” the Liverpool fighter said at an e-press conference fronted by his promoter Eddie Hearn.

“But I was training anyway, I live a good life, I’m always in and around the gym. It’s four weeks’ notice but four weeks where I’m in OK shape to just tailor it towards ‘Canelo’ Alvarez.

“If I didn’t believe I’d been in good shape come December 19 I would have turned it down and planned on securing the fight next year. I’ve got no excuses, I’ll be in very good shape.

“My brother Liam has been in with him and as much you can watch someone over the years on video, it’s always different being in with them.

“Liam has seen him up close, he knows little things he does very well and stuff he feels I can capitalise on. I’ve picked his brains before this fight was even made over the fight and more so throughout camp.

“He’s with me every day in the gym, he watches the spars, him and (trainer) Joe (Gallagher) have both given me advice and I believe he will come up with a good game plan.

“Providing I stick to it and use all my ability, I definitely believe we can pull it off.”

Smith has won all 27 of his professional fights and is ranked number one at 12st by many outlets, including the venerated Ring Magazine, but the 30-year-old is braced for the hardest challenge of his career.

“I’m up against it but the better the opponent, the better performance from myself – I’ve shown that throughout my career. Every time the chips have been down, I’ve always delivered and I feel this one will be no different.”

Smith has not fought since a debatable points win over John Ryder in November last year, while Alvarez (53-1-2, 36KOs) stopped Sergey Kovalev to capture the WBO light-heavyweight title in the same month.

Alvarez was on the verge of agreeing a fight with Smith’s fellow Briton Billy Joe Saunders before the coronavirus pandemic put a contest on the backburner.

Asked why he has now selected Smith, Alvarez said: “To me he’s the best at 168lbs, he’s listed at number one in the world rankings in the division.