Stephen Jones urges Wales to speed up their attacking play 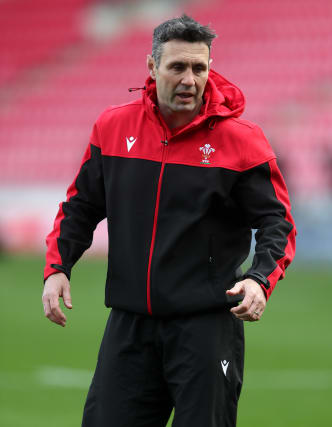 Stephen Jones says that speed is of the essence for Wales’ attacking game as they look to end their Autumn Nations Cup campaign on a winning note.

Italy are next up at Parc y Scarlets on Saturday, with the Azzurri returning to Wales 10 months after they suffered a 42-0 Guinness Six Nations defeat.

With George North at outside centre and the likes of Josh Adams, Louis Rees-Zammit and Liam Williams also thirsting for quality possession, it could prove another long afternoon if Wales click.

“It is really important to have quick ruck ball because then you play against teams that are on the back foot with a disorganised defensive line,” Wales assistant coach and attack specialist Jones said.

“Obviously, the amount of ball you get is key, and where you get that ball on the pitch.

“The key thing is that we know exactly how we want to play, we know where we’ve got to get to, and we are going to work hard to make sure we achieve that.

“The ideal vision is we have to play with speed. It’s as simple as that. We have got to move ball quickly and identify where the space is on the pitch.

“I know a lot of people are talking about how the game is getting managed at the moment, but there is space out there.

“Our challenge from an attacking aspect is to recognise that space and make sure we are set up in the manner to expose it.

“The variety to our attacking game has got to be key, whether we want to be ball-playing or attacking kicks to shape defences. It’s about being smart.”

Wing North wins his 98th cap this weekend, but it will be just a sixth start in midfield as he returns to the team after not featuring against Georgia or England.

And Bristol fly-half Callum Sheedy has another opportunity to pull the tactical strings, having made a considerable impression during an international career that only began three weeks ago.

On North, Jones added: “I am excited by it. He is physical, his distribution is very good.

“He is going to be involved more when he is in the middle of the park, so I see it as an opportunity for George. The best thing for us moving forward is that we have a number of options.

“Callum has been excellent. He is very diligent, a good professional, with a good temperament and composure. He is comfortable on the ball, and it is an opportunity for him this weekend.”

Defences and a kicking-orientated approach have dominated the Nations Cup ahead of its final weekend, leading to claims in many quarters of a boring spectacle.

Jones is not part of that thought brigade, although he said: “Listen, I understand the frustration that is out there.

“The key for us as attack coaches is we have got to make sure that we identify space.

“Ultimately, there are 15 people that are trying to shut you down and stop you playing and take your space and time away. I know that.

“We have got to make sure we counteract that. That’s our job as attack coaches, isn’t it?”