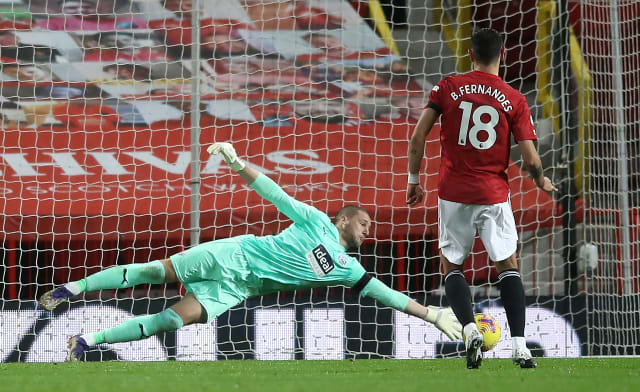 West Brom’s Sam Johnstone claims the current penalty rules are not fair on goalkeepers and wants them changed.

The 27-year-old has saved almost 25 per cent of the spot-kicks he has faced in his career but feels it is now harder for keepers.

From the start of last season they need to have at least part of one foot on the goal line and are also not allowed to stand behind the line.

Johnstone initially saved Bruno Fernandes’ penalty at Manchester United last month before it was retaken after he was fractionally off his line and the midfielder scored to condemn the Baggies to a 1-0 defeat.

He is unhappy penalty takers are allowed to jump and stutter in their run-ups and wants any antics banned.

“If you want us to stay on our line, surely they can’t just do what they want when taking the penalty. It has to work both ways,” said Johnstone, ahead of Sunday’s visit of Crystal Palace.

“Just run up and hit it – you’re still favourite. I think that would probably just stop all the messing about with waiting, if I’m off my line, retaking it and stuff like that. Just run and hit it, the goalie stays on his line and that’s that.

“It’s difficult to keep your foot on the line and you can’t start behind the goal, you have to stand on it and just dive sideways. It’s difficult. It’s just making it easier for the taker to score.

“Take the one at Man United, yes, I came off my line but you need a trigger as a goalkeeper to go and that jump makes you go but you’re too early and off your line.

“It just makes it more difficult for the goalkeepers to save it.”

Johnstone has stopped eight of the 35 penalties he has faced since making his debut on loan at Scunthorpe from Manchester United in 2011.

His 43 Premier League saves are also only second to Newcastle’s Karl Darlow’s 44 this season.

It has given him the confidence to believe he can break into the England squad, despite Albion’s struggles leaving them third bottom.

“Gareth Southgate came out and he said (Jordan) Pickford is his number one. Pickford is a very good goalkeeper, so is (Nick) Pope and Dean Henderson,” said the former England Under-20 international.

“I want to be in the thick of that as well and I want to be pushing them and be on the minds of the England set-up.

“I have been there as a kid and now I am in the Premier League playing and I want to get into that set-up and keep pushing.

“There are a lot of good English goalkeepers around and it is not going to be easy but it is something I want to do and it would be a dream come true.

“Pickford has never let England down so it’s not going to be an easy thing to do but it’s on my mind to try to achieve.”