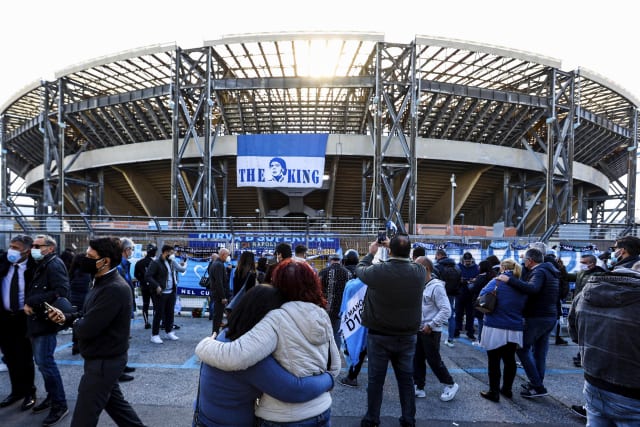 Napoli have announced their stadium has been renamed in honour of their former player Diego Maradona, who died last week aged 60.

Maradona won two Serie A titles with Napoli in 1987 and 1990 and club owner Aurelio De Laurentiis announced plans to rename the San Paolo Stadium soon after the Argentinian’s death.

A brief statement on Napoli’s official website read: “Napoli is delighted by the resolution signed by the entire City Council in dedicating the now former San Paolo Stadium to Diego Armando Maradona.”

Maradona, who died after a heart attack, became an instant hero when joining Napoli from Barcelona in 1984 and spent seven years at the club.

He transformed Napoli from also-rans into a major force and also helped them win the Coppa Italia in 1987 and the UEFA Cup in 1989.

The global game united in grief following Maradona’s death, while Napoli fans gathered at the stadium in their thousands to pay tribute to their former captain.

Maradona scored 81 goals in 188 appearances for Napoli in all competitions and skippered Argentina to World Cup glory in 1986.