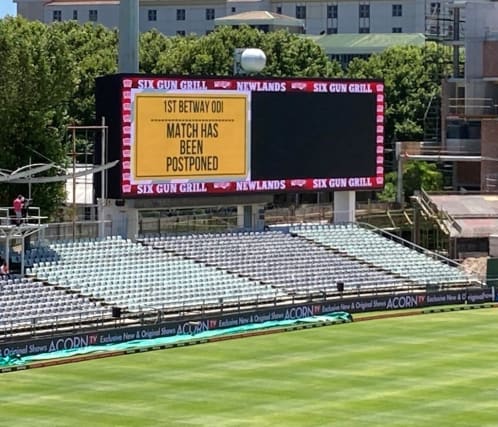 England’s one-day tour of South Africa hangs in the balance following the postponement of Friday’s series opener in Cape Town, with any further Covid cases in the home camp leading to a potential cancellation.

The South African squad received a new positive test on Thursday evening, leading to a series of internal team meetings and hasty discussions between the respective boards, but the match was only officially called off less than an hour before the scheduled start of play at 1pm.

By that time England’s pair of team buses were almost at the gates of Newlands, with some individuals thought to be uneasy about the prospect of the fixture going ahead, and the drivers turned back around as news filtered through.

The entire Proteas party, which also turned up two positives ahead of the Twenty20 series, were set to undergo a fresh round of testing on Friday evening with results due the following mornig. While the England and Wales Cricket Board has not gone on the record about what any additional positives would mean, it appears highly likely that would lead to an early end to the trip.

That worst-case scenario would mean England ending an international tour abruptly for the second time in a row, having departed Sri Lanka in March in the early stages of the pandemic.

As it stands, fulfilling the full three-game rubber is still a possibility, with Sunday’s match at Paarl to be followed by games in Cape Town on Monday and Wednesday. England have agreed in principle to that schedule, but stand ready to withdraw if they lose any further confidence in the safety of their environment.

Ashley Giles, ECB managing director of men’s cricket, is currently with the team and it was notable that his official response only indicated the tourists were “hopeful” of seeing the matches played.

England managed to get through their own domestic summer, consisting of 18 matches across three formats and with four opposition sides, without a single coronavirus case. There is, therefore, understandable concern about the implementation of South Africa’s bio-secure bubble, particularly given the teams are sharing quarters at the Vineyard Hotel.

Both teams have defined zones and cannot mingle, while the swimming pool and gym areas have been regularly deep cleaned between sessions. For now, South Africa have lost those privileges but their visitors will be allowed to continue using the facilities.

“Clearly there’s a cause for concern and England has expressed a concern. England is questioning their confidence that they have in the bio-secure environment and rightfully so,” said Dr Manjra.

“We did a scheduled Covid-19 test yesterday for the team and unexpectedly had a positive. Further tests indicate this is a more recent infection that occurred within the bio-secure environment, so clearly there seems some kind of breach.

“We’ve investigated in great detail to try and determine where this happened. We’ve tried to recount events – speaking to players, looking at security cameras, looking at other information and we haven’t been able to identify where that source was. I’m fairly convinced that 99 per cent of the time this environment is working, but there may be a breach that’s unknown to us, that may have caused this positive test.”

The possibility of an individual leaving the premises without permission has been all but ruled out.

“I can categorically state that no player was able to leave the hotel environment, simply by virtue of the fact there’s security around and the security will not allow a player to leave unless that player is leaving in an official assigned vehicle with an official driver,” said Manjra.

Giles earlier issued a brief written statement which read: “On behalf of the England touring party and the ECB, I would like to thank Cricket South Africa for their collaborative approach to postponing today’s one-day international,” he said.

“Our number one priority is the health and safety of the England team and management group, and the correct decision was made following discussions between the two boards and respective medical teams.

“The England party will remain at its base in Cape Town on Friday and Saturday and we are hopeful that the three-match series will be played before we depart next Thursday starting with the match at Paarl on Sunday.”

England will not receive fresh tests having returned a full set of clear results on Thursday and stuck throughout to their own strict measures.

Graham Potter calls on Brighton to turn draws into wins