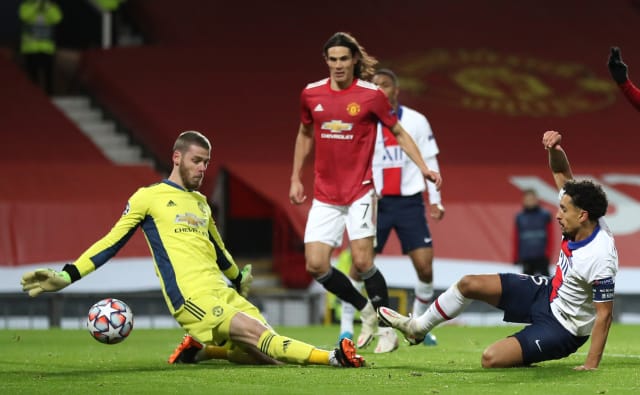 United require a point from their final group game away at RB Leipzig next Tuesday to qualify for the last 16.

How tight is it?

United are still top of their group, but it is extremely tight as they are level on nine points with both Leipzig and PSG. If Ole Gunnar Solskjaer’s side lose in Germany they will drop into the Europa League, but they could still finish top with a point if PSG fail to beat Istanbul Basaksehir in Paris. If PSG win they will be group winners, while victory for Leipzig will take them through. If the Germans draw, they require PSG to lose.

Are United better on the road?

The fact that United are away in their final group game could boost their chances. Leipzig need to win to guarantee their progress and Solskjaer’s side have proved highly effective on the counter-attack this season. United have won all four of their Premier League games on the road and looked dangerous through swift breaks before Marcus Rashford’s late goal clinched them victory against PSG at Parc des Princes.

Will Rashford be fit to face Leipzig?

Rashford has shone in the Champions League this season, notching his sixth goal in five group games in Wednesday night’s 3-1 defeat to PSG. But he is currently struggling with a shoulder injury, which forced him off midway through the second half. Solskjaer revealed the problem requires medical attention and the England striker is doubtful for Saturday’s Premier League game at West Ham.

Can class-act Cavani make a difference?

Edinson Cavani is beginning to show in a United shirt why he has been one of Europe’s leading strikers for so long. The former Napoli and PSG forward has added a new dimension to the Old Trafford attack and there are signs that both Rashford and Anthony Martial can prosper with him alongside them. Cavani struck the crossbar with a brilliant long-range chip against PSG with the score at 1-1 and – had that gone in – it could have been a different story.

Why has Group H gone down to the wire?

United made a blistering start by following up their opening group win in Paris with a 5-0 thrashing of Leipzig at Old Trafford, but have paid a heavy price for their 2-1 defeat to Istanbul Basaksehir in their next tie. Leipzig have taken maximum points in both their games against the Turkish champions thanks to a last-gasp winner on Wednesday night, while PSG, who face them in their final group game, won 2-0 in Istanbul.