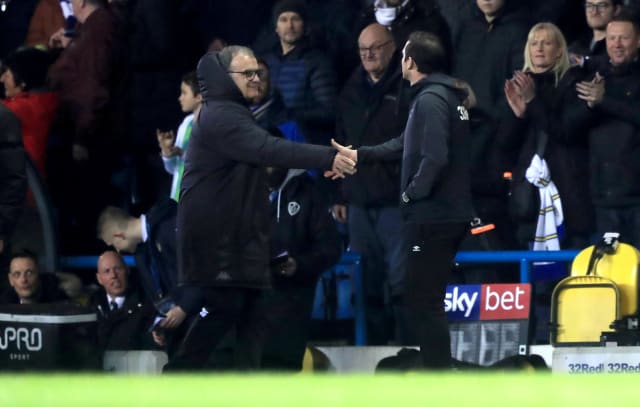 Marcelo Bielsa was careful not to fan the flames before he renews his rivalry with Chelsea boss Frank Lampard at Stamford Bridge on Saturday.

Lampard was highly critical of Bielsa during the ‘spygate’ saga two seasons ago when the former England midfielder was in charge at Derby.

Bielsa sent a staff member to spy on a Derby training session, later admitting he had spied on every club he had faced, while the Rams beat Leeds in an acrimonious Championship play-off semi-final later that season.

When asked to describe his relationship with Lampard before Leeds play Chelsea for the first time in the Premier League since 2004, Bielsa said: “It’s not bad.

“The relationship I have with him is similar to the ones I have with the rest of my colleagues.”

The Football Association fined Leeds £200,000 for Bielsa’s spying admission, which the Argentinian later revealed he had paid out of his own pocket.

At Thursday’s press conference, Bielsa said he had learned his lesson and would not be drawn when asked if Lampard had gained the wrong impression of him.

“This is a moment that has already gone past. It was already resolved by the authorities, who judge how these actions need to be punished,” said Bielsa, who added he had learned his lesson.

Leeds registered their fourth Premier League win of the season at Everton on Saturday and sit 12th in the table, eight points above the relegation zone.

Chelsea are third after Sunday’s goalless home draw against leaders Tottenham and secured top spot in their Champions League group in midweek after thrashing Sevilla 4-0 in Spain.

Lampard’s side are unbeaten in the top flight since a 2-0 home defeat to Liverpool in August and Bielsa has been impressed.

“During last season he developed a lot of players that were already in the institution,” Bielsa said.

“This season he improved the composition of his team, choosing players for the positions he deemed he needed.

“This is shown by the way the team is playing well and the way individuals in the team are playing. There’s many different types of component in his team.

Bielsa has no new injury concerns and is expected to select from an unchanged squad on Saturday.

Pablo Hernandez (muscle strain), Jamie Shackleton (thigh) and Diego Llorente (groin) are all closing in on a return to action, but are unlikely to feature.