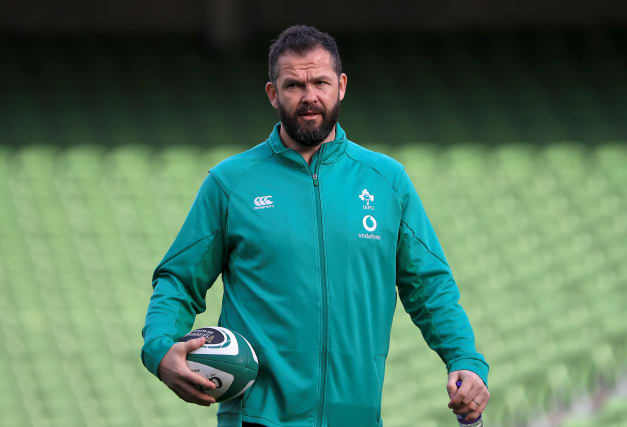 Ireland head coach Andy Farrell says his team are in a “determined mood” ahead of Saturday’s clash with Scotland as he seeks a strong finish to an inconsistent year .

Farrell has named arguably his strongest available XV for the Autumn Nations Cup third-place play-off, having chopped and changed his selection throughout the tournament.

The fixture marks the end of Farrell’s first 12 months in the job, with his performance rated as an “average return” this week by the Irish Rugby Football Union.

“We always want to put in a performance, but professional sport doesn’t always go your way,” said Farrell.

“This is the next game on the calendar for us, so it’s always the most important of the year – that’s how we’re looking at it.

“We want to be better than that second-half performance (against Georgia).

“A lot of what has been going on over the last five games is about building towards next year’s Six Nations.

“This is obviously a big building block towards that.

“We’re in a determined mood, ready to put a performance out there at the weekend.”

After finishing third in the prolonged 2020 Six Nations, Farrell has used 34 players in the current competition in an attempt to grow his selection pool.

That number is expected to increase further at the weekend, with uncapped Ulster prop Eric O’Sullivan likely to win his maiden Test cap from the bench.

The six changes to Farrell’s starting team includes the return of veteran fly-half Johnny Sexton, who was forced off by a hamstring issue in the win over Wales on the opening weekend of the tournament.

Sexton will resume his long-standing half-back partnership with Conor Murray and Farrell believes his skipper is “chomping at the bit”.

“Johnny coming back is a big boost for the lads,” said Farrell.

“Johnny’s been working unbelievably hard in the background to make his presence felt. He has come through his rehab in the right amount of time, he’s been ahead of schedule.

“And he is chomping at the bit and ready to go.

“He brings a feeling to the group that makes everyone feel right and ready to go for a big Test match at the weekend.”

Centre Robbie Henshaw, who has missed the last two games with a groin problem, and Bundee Aki will resume their midfield partnership having also been brought back for the game in Dublin.

A groin issue for winger James Lowe has resulted in Farrell selecting an unchanged back three of Jacob Stockdale, Keith Earls and Hugo Keenan.

Locks James Ryan – who took on the captaincy during Sexton’s absence – and Iain Henderson are also retained.

With an experimental period set to end, Farrell was non-committal when asked if he now knows his strongest team.

“This is a strong team. Everyone knows we’ve got quite a few injuries. But that’s professional sport, there’s no excuse,” he said.

“You’d expect six or seven players to come back into contention for the Six Nations. But you’re always having to deal with that (injury) aspect.

“Do you really ever get to watch your strongest team? Probably not.

“But, at the same time, there’s always going to be a wish list after you’ve witnessed what’s just gone on in front of you regarding the last six or seven weeks.”