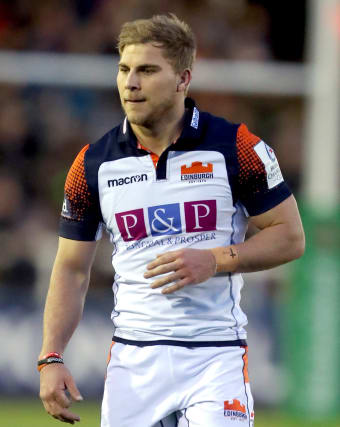 The 26-year-old Edinburgh playmaker has completed his residency qualification, and will make his Test debut against Ireland on Saturday.

Scotland will take on Ireland at Dublin’s Aviva Stadium in the third-fourth play-off, with head coach Townsend admitting he never expected to have the luxury of five options at fly-half.

“It seems like we’ve got more depth, I think 36 players have played in this campaign and it will be three more this weekend,” said Townsend.

“So that’s a number in itself to say they have all played international rugby and we’ve played pretty well in this period.

“We’ll have our fifth stand-off in five games this weekend, if you count Staurt Hogg’s 10 or 12 minutes at Llanelli at the beginning of this campaign.

“So I don’t think I would ever have thought that we could have had five stand-offs playing international rugby. So there’s growing depth.

“We certainly have depth in one or two positions and that’s very exciting to have as a coach, second row for example, the depth there is really impressive.

“And we’re very aware that there are second rows playing very well outside of our group.

“You want those two players challenging for each position to be up there with the best in the world, and we’re moving towards that. But I think certainly we can be better in that regard.”

Blair Kinghorn misses out due to a broken finger, while George Horne has not quite shaken off a foot issue.

Hamish Watson was fit for selection but Townsend opted to shake up his back-row resources.

Full-back Hogg will provide fly-half cover for Van Der Walt, with the Exter star set to win his 80th cap.

Van Der Walt is the latest residency qualifier to make his way into Scotland’s ranks, with Townsend happy to capitalise on greater selection numbers.

While Edinburgh’s combative playmaker could face a big challenge in acclimatising to Test rugby in Dublin, Townsend believes he boasts the physicality and skill set to thrive in the arena.

“And just doing what he’s been doing really well for Edinburgh.

“This year and last year, he’s taken his game to another level.

“Defensively he must be one of the best tackling stand-offs in world rugby.

“His passing and his kicking is at a high level.

“And he’ll just be looking at ways to best influence a defence. And that will be just a little bit quicker at international level.

“But we’ve got real belief and faith in his ability and those around him to bring the best out of our backline and our team attack this weekend.”