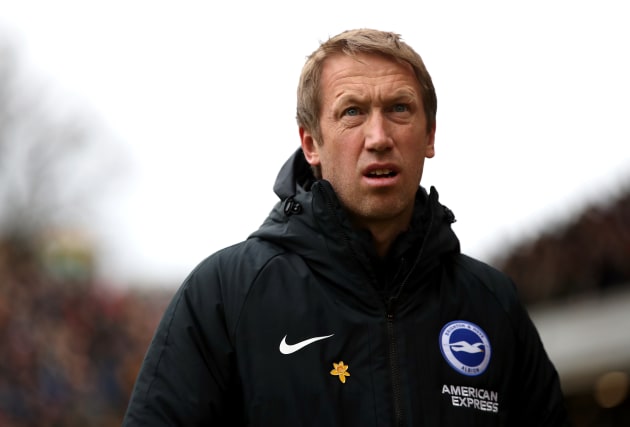 Brighton boss Graham Potter is relishing the return of fans to the AMEX Stadium as his side looks to climb the Premier League table.

A crowd of 2,000 will watch the Seagulls when they face Southampton on Monday night after coronavirus restrictions were lifted for clubs in Tier one and two areas.

It will be the first time spectators have been allowed into a league game at the AMEX since March, although the club’s pre-season friendly against Chelsea in August was used as a pilot event before plans for a general return were put on hold.

Potter said: “We hope that it’s a really positive impact. I am sure the players will look forward to seeing them and playing in front of them. It’s what makes football, ultimately.

“We have had games at home even after lockdown – Manchester United, Manchester City, Liverpool – the games we have lost are arguably the ones where you really need the supporters, we have had to play those behind closed doors.

“We hope we can use the support, we hope that we can play well and get them involved in the game, that they provide a good atmosphere and that can help us against a good opponent and get a positive result.”

The returning fans, however, will not see midfielder Adam Lallana in action with the midfielder having been ruled out for two weeks after aggravating a groin injury during a brief appearance as a substitute in last Saturday’s 1-1 draw with Liverpool.

Potter said: “He’s probably going to be a couple of weeks, so it’s not too bad. It’s a little bit of a setback, but nothing too serious, which is positive.

“He is recovering well and getting on with his rehab.”

Meanwhile, Potter has backed calls for the introduction of concussion substitutes after Arsenal defender David Luiz was allowed to play on after a clash of heads which left Wolves striker Raul Jimenez with a fractured skull.

Potter said: “I am in favour of concussion substitutes. When it comes to the head, you should really err on the side of caution, so therefore that makes sense for people to do that.

“Life is pretty much like that – there are things we did in the past that we don’t do anymore because it’s not right. I am sure there are things that we can do now that are better and will change the game for the better.

“One of those things is probably around head injuries and concussions because the effects further down the line are quite significant. The more we can do to understand that and to help it, the better.”