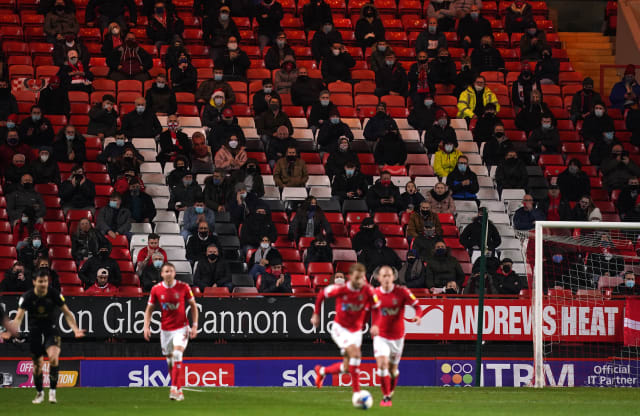 Six EFL clubs were able to host supporters amid the battle against coronavirus on Wednesday.

Luton, Wycombe, Charlton, Shrewsbury, Cambridge and Carlisle all had crowds for the first time since March, excluding some pilot events in September.

Teams in Tier Two can have up to 2,000 fans, adhering to coronavirus restrictions including social-distancing, after the lockdown ended on December 2.

Cambridge had an attendance of 1,917 at the Abbey Stadium as they slipped to a surprise 1-0 defeat to struggling Mansfield in Sky Bet League Two and Mather hopes clubs can set an example.

He told the PA news agency: “Those clubs and the next ones in the next wave are really ambassadors for football. We have to show we can do this well.

“We are putting in the resources we need to do to show it can be done. Hopefully others, including those higher up the pyramid, can benefit from having fans back.

“If we get it wrong they are not going to get back into any other stadium.

“Off the pitch it was a real win for football. We lost but the really important thing was getting fans back and showing it can be done in a safe way and socially distanced.

“There was a sense of responsibility to get it right, not apprehension as we’d put in an awful lot of effort to get it done well.”

Wycombe lost 1-0 to Stoke but 1,000 fans returned to see the Chairboys in the Sky Bet Championship for the first time in their history.

Boss Gareth Ainsworth told the club’s official site: “You saw the first throw-in we gained, it was almost like a goal had gone in. It was fantastic, eight months of frustration, desire and want.

“There’s a promotion in there, all the history, there are people wearing Wycombe shirts all around the town. It’s awesome to see them back home in the stadium, back in their stadium.

“It was brilliant to see them egging the players on. They were great before the game, during the game and after the game. They really do appreciate the efforts and what we’re trying to do here. I couldn’t do without them now.”

Fans needed temperature checks on arrival while hand-sanitising stations and one-way systems were in operation.

“I am absolutely delighted,” Wycombe fan Jeff Harvey told the PA news agency. “It was odd with only a handful of people walking down the road and it’s not a great night for it, but we won’t let that spoil anything.”

Luton beat Norwich 3-1 in the Sky Bet Championship in front of 1,000 fans as the club held a pilot event.

“It is fantastic. It has been too long. I have been coming to football for 50 years and every other Saturday it has been like missing a tooth.

“I did miss going to the pub before the game but you can’t have it all.”