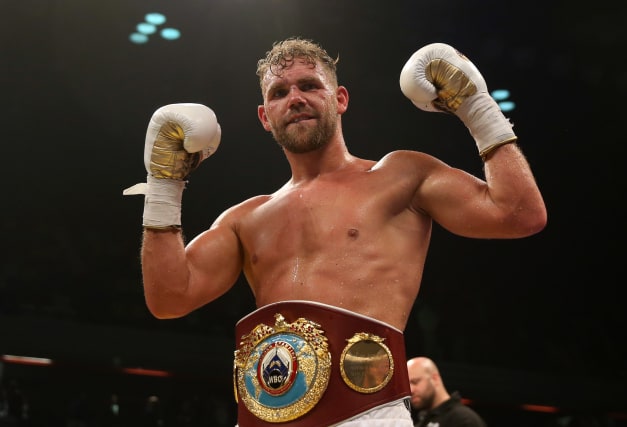 Saunders was on the verge of signing to fight Saul ‘Canelo’ Alvarez earlier this year but that high-profile contest was scuppered by the coronavirus pandemic, and the Mexican will now take on Callum Smith on December 19.

Instead, Saunders will make the second defence of his 168lbs crown at the SSE Arena, Wembley, against Murray, who has fought for a world title on four occasions, with at least two ending in debatable points decisions.

Only once in a 45-fight career in the paid ranks has Murray been outclassed – stopped in 11 rounds by Gennady Golovkin in 2015 – but Saunders believes another loss will lead to his 38-year-old rival bowing out of the sport.

Saunders, a two-weight world champion who has won all 29 of his professional fights, said: “I want the (Daniel) Jacobs fights and the Canelo fights and the (Demetrius) Andrade fights now, but everyone was tied up this year.

“The only one really worthy of taking the fight which was available was Martin Murray. People are looking at this fight as a walk in the park for me and think I should win easily.

“But he’s a four-time world title challenger. In my opinion, he’s a two-time world champion, so it’s not a bad pick out of the bunch.

“I know Martin is coming to fight but I haven’t been beaten on UK soil since I was 12 years old. I’ve got a good track record, and I’m going to keep it that way.

“He’s going to bring a good game, but afterwards he can take his cash back and have a good Christmas and retire with the family, because that’s what I’m planning on doing, retiring him.”

The pair were supposed to meet twice in 2018 but on both occasions, the fight was called off because of injuries to Saunders, who scaled 11st 13lbs 5oz at Thursday afternoon’s weigh-in.

Murray, who came in an ounce heavier, said: “This is my fifth one now. I know how hard a fight it’s going to be.

“I really rate Billy Joe. We’ve got unfinished business. I firmly believe and truly believe that the pull outs years ago, all of the little setbacks that I’ve had, have all brought me to this point.

Belfast fighter James Tennyson takes on unbeaten Canadian Josh O’Reilly in an eliminator for the WBA lightweight title on the undercard.

Shannon Courtenay, meanwhile, will be bidding to get her career back on track after losing to Rachel Ball last time out. The popular super-bantamweight faces Dorota Norek in a bout scheduled for eight rounds.