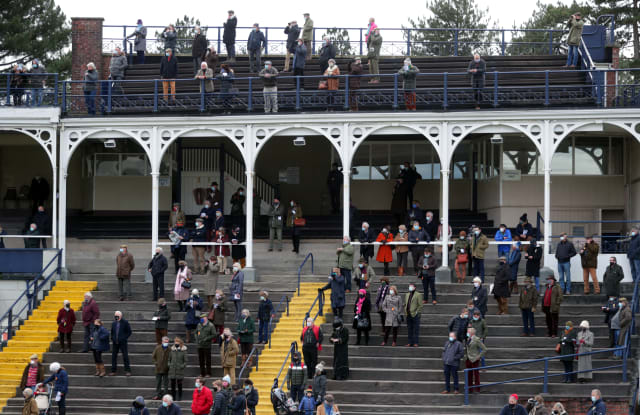 Larger-scale pilot events are under “active discussion” but hinge on responsible spectator behaviour at upcoming events, according to the leader of a key working group.

Sports venues in tiers one and two of the new regionalised system were able to welcome spectators from Wednesday, with crowds attending EFL football matches and horseracing meetings on the opening day.

The guidelines ultimately allow for up to 2,000 people to attend events in tier two, climbing to 4,000 in tier one, though currently only a tiny fraction of the country is in that tier.

The Government’s guidance allows exceptions for attendances over 4,000 for “any Government-endorsed test events”.

The Sports Technology Innovation Group (STIG) is working on how technology can help get greater numbers into stadiums, and its chair, Carphone Warehouse co-founder David Ross, says those larger test events are being worked on.

However, he says fan behaviour will underpin the ability to move towards those greater numbers.

“There is now a hope and an ambition that large-scale pilots will be the next stage of where we go, and it is fair to say that is an active discussion between ourselves and DCMS,” he told the PA news agency.

“They have got to be really well thought through. I have no doubt that the most important thing in taking this forward will be proving that the 2,000 and 4,000 levels is something we can build upon.

It has launched a campaign – For The Love Of Sport – to coincide with the return of spectators to venues and to emphasise the responsibilities fans have to the sports and clubs they love, and that the venues and clubs have to keep them safe as individuals.

Venues across a number of sports including football, horseracing and rugby union will display tailored messaging.

For instance, Wycombe have already posted a banner on their website ahead of Wednesday night’s match against Stoke, where fans will attend: “For The Love Of The Chairboys Please Keep A Safe Distance.”

Venues will also be able to display ‘We’re Fan Ready’ banners to show they have adhered to the protocols and guidance set out by the Sports Grounds Safety Authority (SGSA) and Government.

Ross said: “One of the key pillars of our ability to move forward is responsible behaviour on behalf of fans.

“We have got ourselves to base camp, we’ve got ourselves in a really good position to move forward and I would urge all fans to see this as a great opportunity to be part of a shared endeavour to move the agenda forwards.”

There have been 1,000 tickets sold for Wednesday’s Championship matches between Wycombe and Stoke, and Luton and Norwich.

In League One, Charlton have offered tickets via ballot for their match against MK Dons, while Shrewsbury have issued a small number for their game against Accrington.

Three hundred fans can attend the League Two fixture between Carlisle and Salford, with a limited number to be allowed in for Cambridge’s match against Mansfield.

Race meetings at Ludlow, Lingfield, Kempton, and Haydock will have some spectators.

Fans attending Wednesday’s football matches must remain socially distant at all times, and must wear face marks as they enter the stadium and go to their seats.

They will also be told not to touch the ball if it comes near them, or to approach players before or after the game.

Other restrictions will be determined by individual clubs.

On singing and shouting – a staple of attending matches before the pandemic – Government guidance states: “Given the higher risk of transmission associated with singing and shouting, event organisers should remind spectators of this and strongly therefore encourage the use of face coverings in all outdoor spectator settings, including seats/standing points.”

An exemption to current legislation will allow clubs to sell alcohol without a substantial meal, with fans able to drink in the stadium concourses.

On Thursday, the first European football fixture in England to have fans since March will take place when Arsenal host Rapid Vienna in the Europa League.

The club sold out an allocation of 2,000 tickets for the match within 20 minutes, having offered them to season-ticket holders on a first-come-first-served basis.