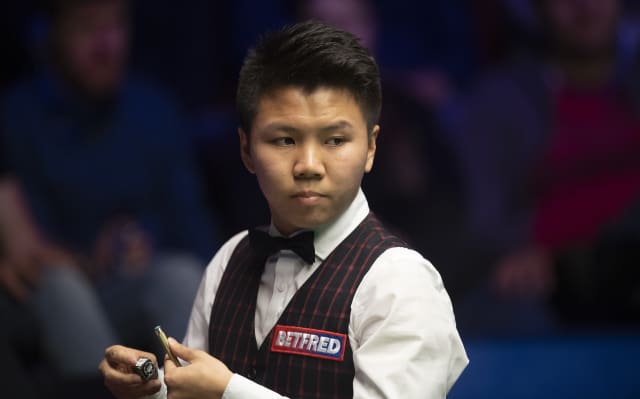 John Higgins has tipped Zhou Yuelong to become the next Chinese player to make a major breakthrough in snooker after being eliminated from this year’s UK Championship by the youngster in Milton Keynes.

Three breaks over 60, including a 90 in the opening frame, were enough for 22-year-old Zhou to seal a 6-2 win over Higgins, a three-time winner of the competition, and reach his first ‘triple crown’ quarter-final.

Higgins showed signs of a revival with his highest break of 80 in the seventh frame and though he ultimately left himself with too much to do, he admitted how impressed he was with his conqueror.

Ding Junhui is the only Asian to have reached the top of the rankings or win a ‘triple crown’ event but Higgins believes Zhou has all the tools to emulate his Chinese compatriot.

“I really rate him as a player, he’s a great young player,” the Scottish veteran told Eurosport.

“He wants to improve every time you see him, he’s always practising and I think he’ll be the next player after Ding to really break through and win a really big tournament.

“He’s got a great temperament and all-round game, and he’ll be here for years to come.”

Higgins even feels world number 23 Zhou did not have to be at his best to win, adding: “He probably didn’t play as well as he can play, he missed a few which he normally never misses.”

Another former multiple winner, Neil Robertson, fared better but had to come from behind to sink Glasgow’s Anthony McGill 6-4.

McGill looked in control for much of the match but a superb 132 break in the seventh frame got Robertson’s campaign up and running and he reeled off four in a row to seal his last eight spot.