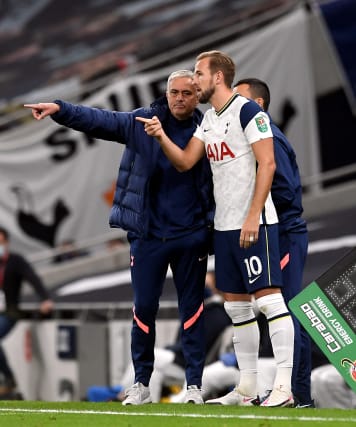 Harry Kane has emerged as a potential doubt for Sunday’s north London derby after Tottenham head coach Jose Mourinho confirmed the striker missed training on Wednesday with an injury.

Spurs take on LASK in Group J of the Europa League on Thursday and vice-captain Kane is not set to be part of the travelling squad.

Fellow forward Carlos Vinicius, midfielder Erik Lamela and left-back Sergio Regulion were also absent from training ahead of the clash in Austria, but centre-back Toby Alderweireld has returned after a groin injury.

Asked about Kane, Mourinho said: “I’m not going to tell you the nature of his injury. I think he has a good chance (against Arsenal).

Kane, the club’s top goalscorer with 13 goals in all competitions this season, was an unused substitute when Spurs beat Ludogorets 4-0 last week but played the whole of Sunday’s goalless draw at Chelsea.

He will now face LASK and that is the case for Alderweireld too, even though the news on the Belgian is positive.

Mourinho described his groin injury sustained in the 2-0 win over Manchester City on November 28 as “bad” but he has recovered more quickly than expected.

“But he’s doing very well and there’s a chance that he plays. But Joe (Rodon) played against Chelsea and it was not an easy first match to play and Davinson Sanchez will play (on Thursday) too so we have our options.

“If Toby cannot play (against Arsenal) we will not cry like we did not cry against Chelsea and it will be a chance for another one.”

Dele Alli has barely featured for Spurs in the Premier League this season, but has been a regular in the Europa League.

After a strong showing in the win over Ludogorets, the England international was again not part of the squad for the weekend game at Stamford Bridge.

“I’m really happy I don’t have personal issues with any one of my players. But of course players are happier when they play, they’re not happy when they don’t play. I don’t blame the players, it’s just the way it is.

Spurs only need a point at Linzer Stadion to qualify for the last 32 and, despite being in the middle of a tricky run of fixtures, Mourinho’s only focus at the moment is on the Austrian side.

“We don’t weaken the team because the Premier League match is more important than the previous one,” the Portuguese said.

“We had Chelsea last week and before Chelsea we had Ludogorets and we weren’t thinking about Chelsea.

“We made the changes that we thought we had to make and to give some players some chance that they deserved. So in this moment Arsenal is not in our mind.”

Tottenham are fighting on three fronts currently and sit top of the league, on the verge of reaching the Europa League knockout phase and with a Carabao Cup quarter-final tie at Stoke coming up later this month.

Spurs will turn their attention to the FA Cup in January, when they travel to eighth-tier Marine in round three.

Mourinho has promised to take a strong squad to Rossett Park, adding: “The best way to respect them is to take the team, the players that they want to play against and we’re going to respect them and respect the competition.”

Chorley heroes of yesteryear hoping for another Wolves upset