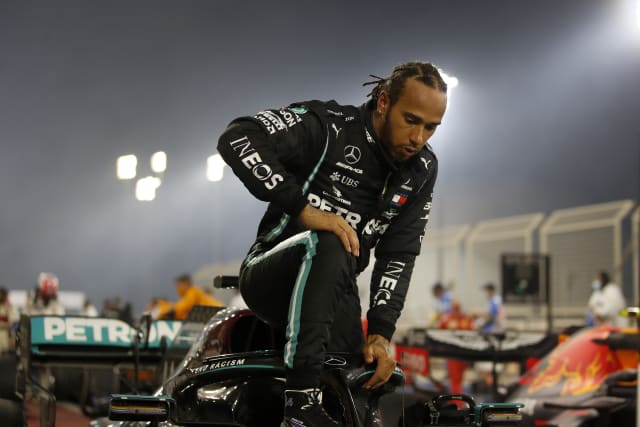 A “devastated” Lewis Hamilton has been ruled out of this weekend’s Sakhir Grand Prix in Bahrain after testing positive for coronavirus.

The seven-time Formula One world champion, 35, who has “mild symptoms” but is “otherwise fit and well”, will have to isolate at his hotel here in Bahrain for 10 days, also putting his participation in Abu Dhabi a week on Sunday in serious doubt.

One high-ranking source told the PA news agency that it is “unlikely” Hamilton will be able to race at the season finale on December 13 due to strict Covid-19 protocols.

Hamilton was in Dubai with his family, including father Anthony and brother Nic, before he travelled to Bahrain.

He got to Bahrain on Thursday, returning two negative results – one on his arrival and the other on the morning of Sunday’s Bahrain Grand Prix where he won for an 11th time this season.

But the Englishman tested positive the following day after he was informed a member of his ‘Dubai bubble’ had contracted the illness. Hamilton’s friend, Daniel “Spinz” Forrest was also among the travelling party.

Hamilton’s absence could pave the way for British driver George Russell to take his seat.

It understood that Mercedes want the 22-year-old to replace Hamilton and are in discussions with Williams about releasing him for this weekend’s race in Bahrain.

“I am devastated that I won’t be racing this weekend,” said Hamilton, who has not missed a grand prix since making his debut in Australia in 2007.

“Since we started the season in June, my team and I have been taking all the precautions we possibly can and following the regulations everywhere we have been in order to stay safe.

“Unfortunately, even though I returned three negative results this past week, I woke up yesterday morning with mild symptoms and requested another test which came back positive. I have immediately gone into self-isolation for 10 days.

“I am gutted not to be able to race this weekend but my priority is to follow the protocols and advice to protect others.

“I am really lucky that I feel OK with only mild symptoms and will do my best to stay fit and healthy.”

Mercedes added: “Apart from mild symptoms, Lewis is otherwise fit and well, and the entire team sends him its very best wishes for a swift recovery.”

Hamilton’s race bubble, consisting of his trainer Angela Cullen and assistant Marc Hynes, are also in quarantine. All members of Hamilton’s team will be tested on Wednesday.

It is anticipated that Hamilton will not be eligible to fly until next Thursday (December 10), but due to strict Covid-19 rules in Abu Dhabi, all personnel involved in the F1 event must travel from Bahrain on Monday (December 7).

Yas Island, where the race is being staged, will then effectively be locked down.

Last week, Hamilton posted videos to his Instagram account playing tennis with his father Anthony and running along a beach.

In another video, the Mercedes driver could be seen travelling in the same car alongside Anthony and Forrest in Dubai. While both his father and Forrest were wearing masks, Hamilton did not have a face covering on.

Hamilton, who wrapped up his record-equalling seventh world championship in Turkey last month – and is on course to be knighted in the New Year Honours – is the third F1 driver to have contracted coronavirus.

Meanwhile Mercedes junior driver Russell, who is in his second season with Williams, could now be thrust into the spotlight.

Williams will be reluctant to let their star driver miss one, possibly two races, as the British team heads into the final stages of the season rooted to the foot of the constructors’ championship.

A spokesperson for Williams did not wish to comment when contacted by the PA news agency.

Mercedes reserve driver Stoffel Vandoorne, formerly of McLaren, is the only other contender for Hamilton’s seat.

An announcement is expected on Wednesday.