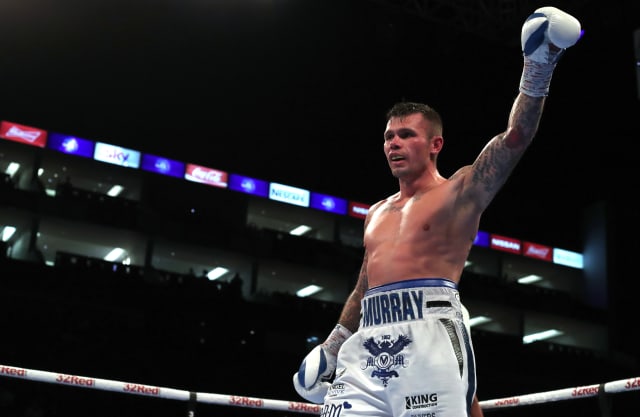 Martin Murray may have come up short in four world title tilts but he believes fifth time is a charm ahead of a showdown against WBO super-middleweight champion Billy Joe Saunders on Friday.

Debatable points decisions came in a draw against Felix Sturm in 2011 and a unanimous decision loss to Sergio Martinez two years later, although Murray was outclassed and stopped in 11 rounds by Gennady Golovkin in 2015.

Five years on from a wafer-thin split decision defeat to Arthur Abraham, Murray is back on the world stage and, for the first time in his career, getting his opportunity on home soil when he takes on Saunders at the Wembley Arena.

The unbeaten Saunders is the overwhelming favourite to prevail but Murray insists he has fought better opponents than the Hertfordshire southpaw, whose only experience at 168lbs has been against unheralded fighters.

“I’m expecting a hard fight but I’m confident,” Murray said. “Everything happens for a reason and all the little setbacks I’ve had in the past have been building to this. I’m ready for it and I really do feel like it’s my time.

“It’s a win-win for me, there’s no pressure. Everybody’s written me off but I know that I rise to the big occasion in the big fights, you see the best of me.

“I’ve done it the hard way and not got there. I’ve been in with better opposition, I should have been world champion but I’m not. He’s done it the easy way and got there.

“If I’d have fought the people he’s fought for world titles, I’d have been world champion and had many more defences.”

Murray’s results against German pair Sturm and Abraham either side of his loss to Argentina’s Martinez all came in his opponents’ homeland.

“I’ve never been one to dwell on things,” Murray said. “But in hindsight I was set up to fail, I think the only fair one was Golovkin – who I fought in his prime in February 2015. He was flying then.

“I train a lot smarter now, I look back and realise how much of an unhealthy obsession I had with winning a world title. I’m just a lot more relaxed about the whole situation. I’ve been there before and done it.”

Murray turned 38 in September, seven years older than Saunders, but he refused to confirm whether he would retire if he loses, insisting he sometimes feels he can emulate former middleweight and light-heavyweight champion Bernard Hopkins, who fought on professionally past his 50th birthday.

“I’m at the stage now where I’m doing it because I enjoy it,” Murray added. “There’s no point saying if I get beat, I’ll retire, because I don’t know what I’m going to do.

“In one breath, I’ll be like ‘one more fight and then I’m done, win, lose or draw’ and then in the next breath I’m thinking I could be fighting like Bernard Hopkins, till I’m 50. I’m just taking it as it comes.”