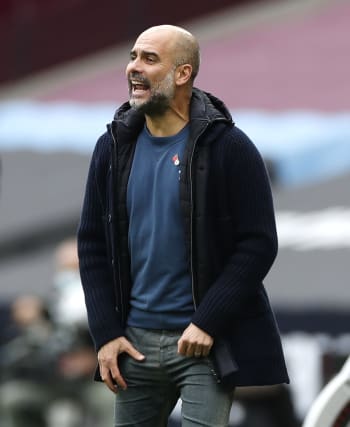 Pep Guardiola has warned that Manchester City’s Champions League trip to Porto could be a feisty affair.

City have already secured their place in the last 16 and manager Guardiola has said the immediate focus is now firmly on domestic matters.

Yet with top spot in Group C still to be resolved and Porto also needing a point to join City in the knockout stages, Guardiola is not expecting the encounter at the Estadio do Dragao to be tame.

City needed to come from behind to win a hard-fought clash between the sides 3-1 at the Etihad Stadium in October.

“It will be a tough, physical game for sure,” said Guardiola. “It was (in Manchester) and I saw their game against Marseille. They have an incredible team spirit, they fight for each other.

“Their physicality is outstanding and it will be tough. But that’s normal, it’s the Champions League away.”

The first game between the two clubs saw some needle between the two benches, with Porto boss Sergio Conceicao later accusing Guardiola and his backroom staff of attempting to influence officials’ decisions.

That was a complaint from the Portuguese that Guardiola was clearly unimpressed by.

Guardiola said: “It’s his opinion but I don’t agree. We didn’t pressure the referee. We are not this type of team to do this kind of thing. It’s not a part of who we are.”

City have travelled to Portugal without record goalscorer Sergio Aguero, who is still troubled by discomfort in his knee. The Argentinian is the only notable absentee from an otherwise fully-fit squad.

Guardiola is hoping left-back Benjamin Mendy can continue to make a strong impression after capping his recent return from injury with a goal – his first for the club – in Saturday’s victory over Burnley. The Frenchman’s three years at the club have been riddled with fitness problems.

Guardiola said: “It’s so important for us that he’s fit. Scoring goals is the last thing I want from him as what I want from him is to defend well, and be fit and be focused. That is what everyone wants from Benji.

“The first step is that he has played two lots of 90 minutes and played quite well but still we have to wait. With Benjamin it depends on him.”