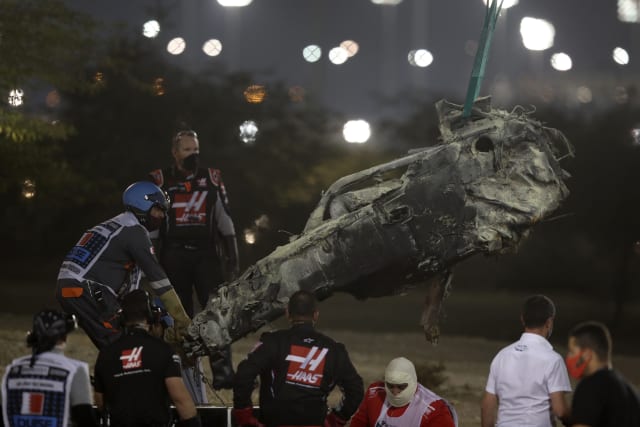 Romain Grosjean miraculously survived a fireball inferno after his car hit the wall and burst into flames on the opening lap of the Bahrain Grand Prix.

Grosjean, 34, scrambled to get of his burning car for almost half-a-minute before eventually leaping away from the inferno and into the arms of Formula One doctor, Englishman Ian Roberts, one of the first men on the scene.

Replays showed that Grosjean moved to his right, before hitting the front-left wheel of Daniil Kvyat’s AlphaTauri, and penetrating the steel barrier at close to 140mph.

The force of the impact, which registered at 53G, split his machine in two.

His cockpit instantly burst into flames and the sport held its breath as television cameras cut away from the extraordinary accident and the race was immediately stopped.

After a number of minutes, Grosjean’s Haas team reported that their driver was out of the cockpit. He was then pictured sitting in the medical car before limping towards an ambulance, aided by Roberts and medical car driver Alan Van Der Merwe.

He had leapt out of his burning machine with his racing boot missing from his left foot.

Grosjean has since been airlifted to the BDF Military Hospital, 10 miles north of the Bahrain International Circuit, with burns to his hands and ankles and suspected broken ribs. It is also understood he might have broken a bone in his foot.

Lewis Hamilton, who was leading the race, was seen shaking his head as he watched a replay of the jaw-dropping accident from inside the Mercedes garage.

Seven-time world champion Hamilton tweeted while the race was suspended: “I’m so grateful Romain is safe.

“Wow. The risk we take is no joke, for those of you out there that forget that we put our life on the line for this sport and for what we love to do.

“Thankful to the FIA for the massive strides we’ve taken for Romain to walk away from that safely.”

There will now be question marks as to how Grosjean’s car managed to penetrate a steel barrier.

A delay of more than an hour ensued as track officials repaired the destroyed barrier.

It was confirmed that the race will restart at 18:35 local time, one hour and 21 minutes after it was red-flagged.

“We just took a little time to process what was going on,” he said.

“I am sure it was only a second or so but it felt like ages and then Romain started to get out of the car himself which was pretty amazing after an accident like that.

“There was some relief when we got back here and he was OK.

“It just goes to show that all the systems we developed worked hand-in-hand, the halo, the barriers, the seat belt, everything worked how it should and without just one of those things it could have been a very different outcome.”