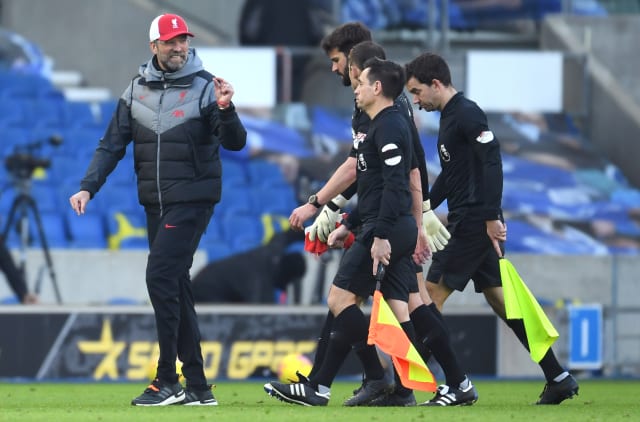 Tottenham returned to the top, Sheffield United remain rooted to the bottom and Manchester City got back in the groove.

Here, the PA news agency looks at five things we learned from the Premier League this weekend.

Liverpool boss Klopp had already made clear his frustration over fixture scheduling and Premier League clubs not being able to make five substitutions this term prior to his side’s 1-1 Saturday lunchtime draw at Brighton – but as he did so again in a heated post-match interview at the Amex Stadium; a new element was a dig at his Sheffield United counterpart Wilder. Asked about clubs voting against the five-substitute rule, Klopp called Wilder “selfish” before adding: “they have three subs and one point if I am right.” It seems unlikely the two bosses will be on each other’s Christmas card lists.

More misery for the Blades

If that made for a less-than-enjoyable start to the weekend for Wilder, things got worse later in the day when his bottom-placed side were beaten 1-0 at West Brom, who had been the only other side in the division yet to win this season. That made it nine defeats in 10 games for the Bramall Lane outfit and things really are starting to look worrying now in the troubled follow-up to their impressive 2019-20 campaign.

The team currently leading the division are Jose Mourinho’s Tottenham, who moved back above Liverpool on goal difference on Sunday following a 0-0 draw at his old club Chelsea. The Portuguese played things down afterwards, insisting his side are not in the title race, describing them as “not a horse… just a pony”. It remains to be seen how they fare over the full distance – but what Mourinho, a three-time Premier League winner with the Blues, might achieve with Spurs is an increasingly interesting question.

Also on Sunday, Edinson Cavani gave the clearest demonstration yet since his his move to Manchester United last month that he can still make a significant impact. Having come off the bench at half-time at Southampton with his side 2-0 down, the 33-year-old Uruguay striker proceeded to tee up a Bruno Fernandes goal and then add a brace of headers as the visitors sealed a 3-2 win.

Manchester City also showed some notable goalscoring form as they thrashed Burnley 5-0 on Saturday. The rout, in which Riyad Mahrez scored a hat-trick and Benjamin Mendy and Ferran Torres also netted, was a considerable boost for Pep Guardiola’s men, with them having previously scored only 10 goals across the opening eight games of their league campaign.