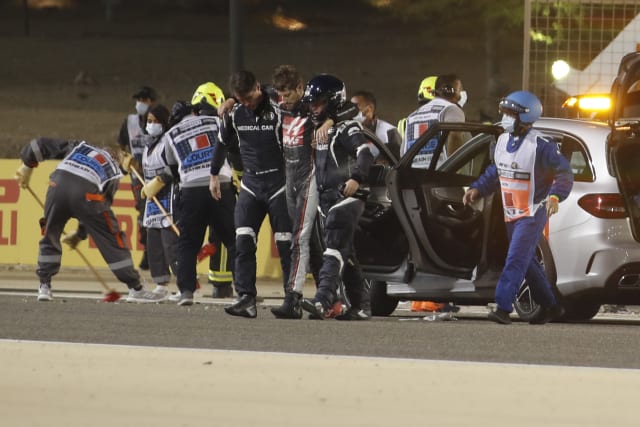 Romain Grosjean’s escape from his 140mph fireball inferno in Sunday’s Bahrain Grand Prix has been hailed as a “miracle”.

Frenchman Grosjean, 34, was involved in the most dramatic accident in recent Formula One memory after his car broke in two when it pierced through a steel barrier and burst into flames on the opening lap of Sunday’s race.

Grosjean spent almost half a minute scrambling to get out of his burning machine before he was flown to the BDF Military Hospital, 10 miles north of the Bahrain International Circuit, with burns to the back of both of his hands.

Remarkably, Grosjean suffered no broken bones in the extraordinary impact which registered at 53G. He will remain in hospital overnight for observation.

“Nobody in their right mind can understand what Romain has been through,” said former world champion Damon Hill, whose Williams team-mate Ayrton Senna was killed at the 1994 San Marino Grand Prix.

“It’s a miracle that he is alive.”

The halo device – the driver-cockpit protection system controversially introduced in 2018 – appears to have played a major role in Grosjean’s survival.

“There is absolutely no doubt the halo was the factor that saved the day and saved Romain,” said F1 motosrport boss Ross Brawn.

“If you recall, there was quite a lot of controversy at the time about introducing it and I don’t think anyone now, especially after today, can doubt the validity and value of it.”

Lewis Hamilton, who won Sunday’s race, said: “I am just so grateful the halo worked and the barrier didn’t slice his head off. It could have been so much worse.

“It is a stark reminder that this is a dangerous sport. We are pushing to the limit, but you have to respect it. That accident will be investigated and there will be a lot of work put in to make sure it doesn’t happen again.

“I would be lying if I was to say no, I don’t think about my future when I see an accident like that. I have been racing 27 years and I was nine when I saw a kid die on the same day I won a race.

“I have always been aware of the dangers and risks that I take and when I get later in life I question it more than perhaps I did when I was in my early 20s.

“This crash was huge and the safety reminds us of the great job that has been done but more needs to be done, so we will continue to work on it.”

Formula One’s governing body, the FIA, will launch a full investigation into the accident, with question marks over how Grosjean’s car penetrated a steel barrier, broke in two, and why it caught alight.

FIA race director Michael Masi warned on Sunday night that the findings of the investigation could take several months.

“I would hate to speculate on why the car burst into flames,” said Masi.

“We will perform a complete investigation from start to finish. It will take weeks, if not months, to look at every single aspect of what happened.”