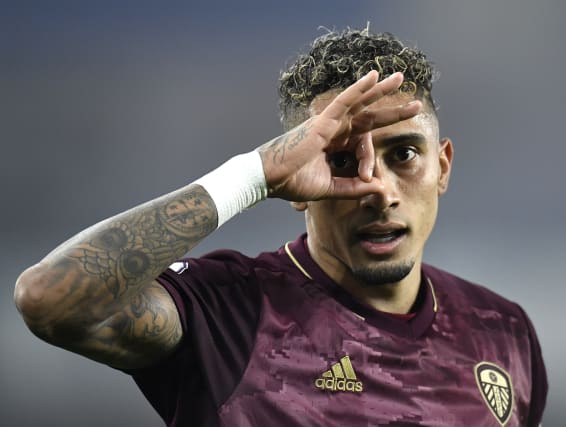 Raphinha picked the perfect moment to open his Leeds account as his strike 10 minutes from time against Everton settled a game which was high on chances but low on goals at Goodison Park.

The entire 90 minutes produced a remarkable total of 38 shots but the only one which mattered fell to the £17million new signing from Rennes who had been a constant thorn in Everton’s side during the visitors’ 1-0 victory.

After numerous well-crafted but unsuccessful attempts from both sides it seemed neither was destined to score, and when the Brazilian collected a pass from Jack Harrison on the edge of the penalty area with time ticking down there was almost a sense it was the moment to just to have a go.

With no other real option on, the 23-year-old picked his spot inside Jordan Pickford’s left-hand post and drilled a low effort through a crowd and past the England international, who had one of his better days.

It secured only Leeds’ second victory in their last seven matches, and their first on this ground since 1990.

Everton’s defensive problems – now a record-equalling nine successive home league matches without a clean sheet, their worst run since December 2012 – meant it is now four defeats in five matches, with this only Carlo Ancelotti’s third league loss at Goodison in 11 months.

The pre-match statistics – 33 goals conceded and just four clean sheets in 18 combined Premier League matches – pointed to a goalfest and it should have delivered one.

The first half alone produced the most shots (20) in the opening 45 minutes of any league match this season, Leeds out-shooting their hosts 13-7, but some errant finishing and excellent goalkeeping from Pickford ensured it was goalless.

Watched by national team boss Gareth Southgate, England’s number one saved with his legs from Patrick Bamford and was at full stretch to tip away Raphinha’s header.

Leeds counterpart Illan Meslier was less spectacular but no less effective in denying Abdoulaye Doucoure from close range early on, before later keeping out efforts from Mason Holgate and Richarlison.

Even when he was beaten twice by James Rodriguez, the offside flag came to his rescue.

But aside from the good goalkeeping there was some profligate finishing as Harrison shot wide and saw Ben Godfrey clear off the line, Bamford missed the target from Harrison’s rebounded header against the post and Mateusz Klich fired just the wrong side of the post.

There was no let-up in the second half, Dominic Calvert-Lewin having two chances, Rodriguez one, with opportunities dropping to Klich and Bamford at the other end.

With Stuart Dallas paying close attention to Rodriguez, Everton’s creative outlet was stymied somewhat, putting more emphasis on Richarlison to produce but it was his fellow Brazilian Allan, a defensive midfielder, who delivered a most purposeful 50-yard driving run at the heart of Leeds’ defence.

By contrast Everton stood off Leeds playmaker Kalvin Phillips, who from his deep-lying position in front of the back four was given the time and space to spray passes to either flank toward the dangerous Raphinha and Harrison.

Another goal, this time for Bamford, was chalked off for offside but there was no denying Leeds’ Brazilian forward, who beat Pickford from 20 yards.

Chances continued to come with Pickford saving well again from substitute Helder Costa as the visitors finished well worthy of their win.