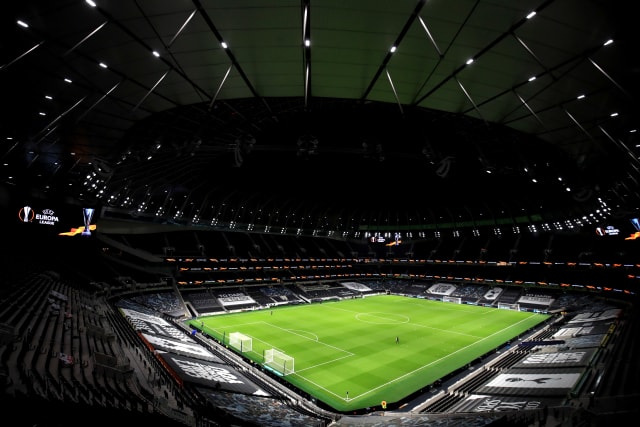 Tottenham have confirmed plans for 2,000 fans to attend the north London derby against Arsenal next month.

All 32 London boroughs plus the City of London are in tier two of the Government’s regionalised coronavirus restriction system, where up to 2,000 spectators are allowed at outdoor sports venues from December 2.

The match on December 6 will be the first to be played in front of spectators at the Tottenham Hotspur Stadium since the FA Cup fifth-round tie against Norwich on March 4.

The club said they will run a ballot of season ticket holders and executive members in order to allocate the tickets.

Spurs said their women’s team’s Super League match against Brighton at The Hive in Barnet would also be played in front of a “limited capacity” on the same day as the men’s derby encounter.

Tottenham said they looked forward to welcoming NHS staff and key workers to the stadium “at the appropriate time” to enjoy a match.

Their north London rivals will be the first Premier League team to play a competitive match in front of supporters since March when they host Rapid Vienna in a Europa League match on December 3.

Bielsa believes the move to allow clubs in tiers one and two to let in a limited number of supporters will “penalise” clubs in the highest tier who must continue behind closed doors.

Bielsa said: “It shouldn’t be about the category, or the consequences of being in a category, it should be about trying to maintain the competition as equal as possible with things that are controllable.

“The presence of fans has an effect on the results.

“What the organisation says is people who are from places where there’s a higher risk of infection, it means they will be penalised.”

Liverpool boss Jurgen Klopp, whose team are in tier two, said: “I said before I knew which tier Liverpool would be in that it’s not about discussing an advantage or disadvantage of this or that, it’s just making small steps in the right direction.

In the EFL, Cambridge and Northampton were among the first clubs to announce they were working on piloting the return of fans in matches in the first week of December.

The Rugby Football Union has announced it will allow 2,000 spectators into Twickenham for England’s final Autumn Nations Cup match on December 6.

Worcester are the first Gallagher Premiership team to welcome fans after the November lockdown, when Bath visit Sixways on December 5. The Warriors have confirmed a crowd of 2,000 will be able to attend the match.

The PA news agency understands World Snooker Tour officials are exploring the possibility of allowing some fans to watch next week’s final stages of the UK Championship in Milton Keynes.

Racegoers could return to courses as early as Wednesday, with Ludlow, Lingfield, Haydock and Kempton all in tier two areas.

Jonathan Bond aiming to make his mark at LA Galaxy