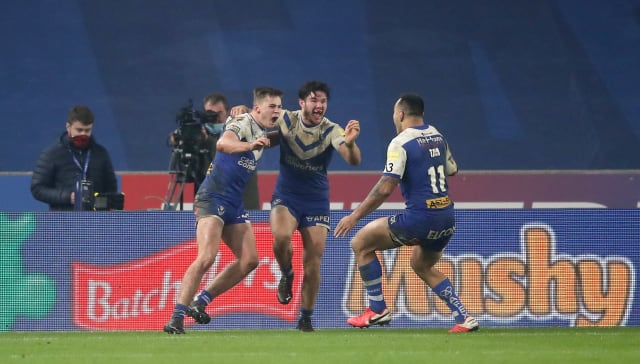 The scores were level at 4-4 heading into the final minute, thanks to two Lachlan Coote penalties and a Jake Bibby try for Wigan, and Zak Hardaker had the chance to win it for the Warriors with a penalty from 45 metres at Hull’s KCOM Stadium.

But the centre dragged his effort wide with 50 seconds remaining and St Helens aimed to work downfield for a late drop-goal attempt, managing to gain territory in the Warriors’ half.

Tommy Makinson was lined up for the effort and, as the ball landed in his winger’s hands, the full-time hooter sounded. His attempt looked to have the distance, but the drama did not end there.

The ball rattled the right-hand post and landed on the turf before bouncing towards the in-goal area, with Wigan full-back Bevan French attempting to shield the loose ball to safety.

However, centre Welsby’s valiant chase proved valuable as he dived for the ball, grounded inches short of the dead-ball line and – after a lengthy look by video referee Ben Thaler – scored the winning try to jubilant celebrations from Kristian Woolf’s side.

Veteran prop James Graham, in the last game of his illustrious career, was reduced to tears on the sidelines as he signed off with a Grand Final ring.

Bruno Fernandes knows Liverpool can easily turn their form around